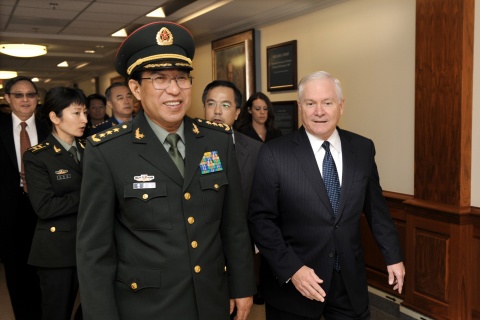 China views Bulgaria as a reliable partner in Europe and within the EU, Gen. Xu Caihou, member of the Central Committee of the Chinese Communist Party, told Bulgarian President Georgi Parvanov in Sofia.

Xu, who is on a three-day visit in Sofia as part of a Chinese Communist Party (CCP), has also thanked Bulgaria for adhering to the policy of "One China", i.e. abstaining from establishing formal diplomatic ties with Taiwan – which was confirmed once again by Bulgarian President Georgi Parvanov at their meeting on Wednesday.

Gen. Xu Caihou, the Vice Chairman of the Central Military Commission in the PRC, presented greetings to Bulgarian President Parvanov from China's President Hu Jintao on the occasion of Bulgaria's National Unification Day, September 6, the press office of the Bulgarian Presidency reported in a statement.

Parvanov has reiterated an earlier invite for a visit by Hu to Bulgaria; if he comes to Bulgaria before his term as President of the PRC expires in 2013, Hu will be become the first Chinese President to visit Bulgaria. However, Parvanov will hardly be the one to welcome him in Sofia because his second term expires in January 2012.

Parvanov met with Hu back in 2008 in China when he visited Beijing for the 2008 Summer Olympics.

During his talks with Gen. Xu, Bulgarian President Parvanov stressed the great potential for trade and Chinese investments in Bulgaria, pointing out the car manufacturing plant of Great Wall Motors in Bulgaria's Lovech in cooperation with the local company Litex.