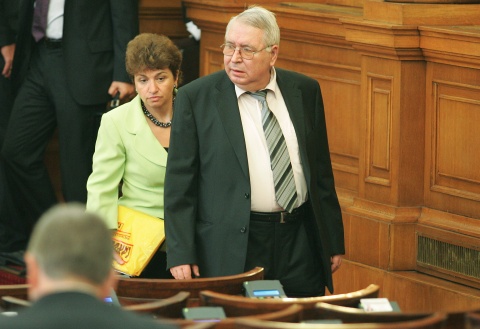 Prof. Lyuben Kornezov, member of the parliamentary group of Coalition for Bulgaria, warned that the postponement of the vote on the constitutional amendments flouts a deadline set out in the Constitution. Photo by BGNES

The parliamentary group of the left-wing Coalition for Bulgaria suggested putting the vote on the amendments on the agenda, but Menda Stoyanova, Chair of the Parliamentary Budget Committee, from the ruling, center-right Citizens for European Development of Bulgaria, GERB, party, said that the vote should be put off because "the country's financial stability must not be put at risk amid pre-election passions".

The Financial Stability Pact, a brainchild of Finance Minister Simeon Djankov, envisages introducing a qualified majority vote of two-thirds of the votes in Parliament to change Bulgaria's direct taxes, introducing a 2% of GDP limit to the allowed budget deficit and capping spending at 40% of GDP.

Upon submitting the draft constitutional amendments to the Parliament at the end of May, Minister Djankov said he hoped the Pact could be adopted by the fall of 2011.

Under Bulgarian legislation, if the amendments fail to get a three-fourth majority but still muster no less than two-thirds of the votes (160 out of 180) at first reading, they can be put to a new vote no earlier than 2 months and no later than 5 months after that.

The amendments are passed at the follow-up voting if they get no less than two-thirds of the MP's votes(160).

Prof. Lyuben Kornezov, member of the parliamentary group of Coalition for Bulgaria, argued that delaying the vote flouted a 3-month deadline set out in the Constitution which was not interrupted by the parliamentary recess.

Parliamentary Chair Tsetska Tsacheva countered that the discussion on the amendments had been conducted within the constitutional time frame, while the timing of the vote itself was not controlled by constitutional provisions.

The discussion of the constitutional amendments pending a first-reading vote started and ended on July 29, when the lack of quorum resulted in the the closing of the plenary session.

"The postponement of the vote reveals helplessness. You fear the vote because you know that you will not be able to summon a majority, and this will set a precedent", said left-wing MP Angel Naydenov, accusing GERB of failing to ensure a sufficient level of agreement on the proposed constitutional changes.

Maya Manolova, MP from the Bulgarian Socialist Party (BSP), accused Tsacheva of turning the 41st National Assembly into a party assembly and urged the ruling party to be brave enough to face the consequences of its initiatives.