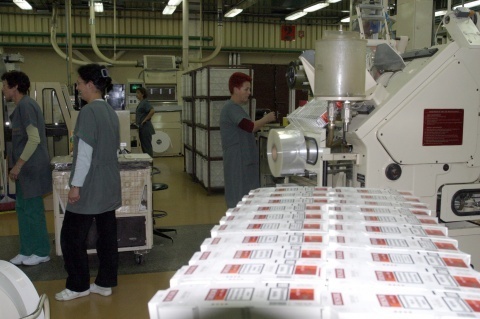 Russian authorities confirmed earlier this month that the country's second-biggest bank VTB plans the acquisition of a majority stake in Bulgartabac, but nobody in Bulgaria believes the bank is acting on its own behalf and on its own terms. File photo

The Russian Federation has submitted a request for a guarantee for a future claim against the Bulgarian State-owned cigarette maker Bulgartabac Holding, but the Sofia City Court had not examined it.

The news was reported by the Bulgarian Dnevnik daily, citing their own check of the Court's records, which had further shown the decision had been made on Wednesday.

The Court had not provided information what were the grounds of Russia's claim against the Bulgarian monopoly and if the Federation wanted the freezing of its assets as guarantee.

The rule and the law require that the requests for guarantees for future claims are being kept secret, because the goal is to not let know the other side about the pending trial and that its property could be blocked in order to avoid its concealment.

The Court electronic records do not contain any information why the request of the Russian Federation had not been examined, but the fact the magistrates declined ruling on the request would not stop Russia to ask again for imposing a freeze on properties and shares of Bulgartabac.

In the beginning of August, Russian media informed that thanks to Moscow the procedures to sell Bulgartabac have failed on two occasions and precisely the Russian claims for 50% of the assets of the cigarette monopoly have halted its privatization so far.

It also remains unknown when exactly Russia had submitted the request with the Sofia City Court to freeze Bulgartabac's assets.

Meanwhile Moscow officially confirmed the interest of the government-owned VTB bank in purchasing the Bulgarian company.

On Tuesday, after one day of examining documentation, the Bulgarian Privatization and Post-Privatization Control Agency approved the sale of the State-owned tobacco monopoly Bulgartabac Holding to BT Invest, a firm registered in Austria by VTB bank, property of the Russian government.

Bulgaria's Economy and Energy Minister, Traicho Traikov, says he has reservations about the deal and would prefer more market criteria than social commitments while Deputy Prime Minister and Finance Minister, Simeon Djankov, labeled it "succesfull."