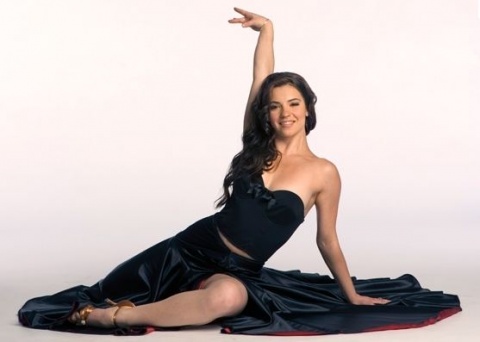 Bulgarian-born, Denitsa Ikonomova, in one of the favorite dancers in the Canadian TV reality So You Think You Can Dance. Photo by SoYouThinkYouCanDanceCanada

Bulgarian-born Denitsa Ikonomova is well on her way to become the next Bulgarian-Canadian celebrity by her participation in the Canadian TV reality So You Think You Can Dance.

The news was reported by the Chicago-based Eurochicago.com – the largest media outlet in Bulgarian in North America while Chicago is home of the largest Bulgarian community on the new continent.

Ikonomova is now almost as famous as the Bulgarian-Canadian actress Nina Dobrev, who won the best actress award this year in the TV Fantasy category of Teen Choice Awards for her role in the US TV series "The Vampire Dairies."

After the most recent elimination round of the So You Think You Can Dance, aired Tuesday evening, Denitsa remained in the contest with scores of enthusiastic Bulgarians in Canada and Canadians voting for her.

The best young Canadian dancers have been selected for the show, with 22 of them reaching the finals. They work with top choreographers and change partners and dance styles each week. The winner will be bestowed the title "Canada's Favorite Dancer."

Denitsa Ikonomova was born in 1987 it the western city of Kyustendil, but grew in the Bulgarian capital Sofia where she began taking dance lessons at the age of 6. Her family moved to Canada when Denitsa was 15. She studies dance at the Arthur Murray school in Montreal.

Despite living so far away, the young woman continues to dance in Bulgaria. She and her partner, Christian Millette, became the first ever Bulgarian National Champions in Latin American and Standard Dances. In 2007, they won the Canadian amateur championship.

Regretfully, only Canada residents can vote to select the country's top dancer.

More details can be found at the official site of the show: http://shows.ctv.ca/SoYouThinkYouCanDanceCanada.aspx