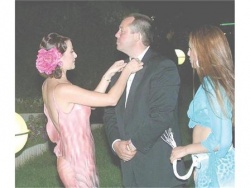 Pavlov, who was born on August 6, 1960, was murdered in a gangland hit in the murky times after the fall of Communism.

Pavlova landed around 11:30 am at the Gorna Oryahovitsa airport in central Bulgaria, the Bulgarian daily 24 Chassa (24 Hours) reports. Considered one of the wealthiest Eastern European women, Pavlova arrived in a Falcon. She has been alone, accompanied only by the pilot while a silver BMW with a driver and a security guard had been waiting for her at the airport. The 24 Chassa reporter informs seeing a large bouquet of white roses on the back seat.

After talking briefly to journalists and thanking the pilot in English, the widow had been driven to Arbanassi near the city of Veliko Tarnovo where Pavlov's chapel is located. The memorial service had been attended by 10 people, mostly relatives, including the couple's fathers. The Arbanassi Palace residence had been closed for visitors with two guards at the entrance and a sign saying "Closed for Private Event." The monastery's entrance had also been monitored by a guard, sending common worshippers away.

The ceremony had lasted for 20 minutes with the attendees retreating to the residence through a side door.

Iliya Pavlov was gunned down in Sofia on March 7 2003, when leaving his offices. His killers remain unknown and at large.

Pavlova has been living in Rome, Italy, for the last three years in a lavish apartment in the heart of the city.

She regularly makes socialite headlines in Italian media over her ties with famous people, her frequent travels between Rome and Milan and appearances at parties and charities, often in the company of Italian Prime Minister, Silvio Berlusconi. The two openly admit they are close friends, but firmly deny rumors of an intimate relationship with Pavlova being a firm defender of the PM, who is often under fire from local media. She calls the attacks slander against a dignified and generous man.

According to 24 Chassa, this is Pavlova's first trip to Bulgaria since the murder of her husband in 2003. She told reporters at the airport she was stunned to see them there, saying Bulgarian media was better informed than CIA and FBI.

Pavlova further told them this would be a very short trip, for a couple of days only, so that she could meet her and Iliya's father, but she had no plans to return to Bulgaria.

Iliya Pavlov has a daughter – Ventsislava from his first marriage and a son - Iliya-Kaloyan and a daughter – Paola with Pavlova. None of them lives in Bulgaria.

Pavlov's sister Slavka Naydenova and her son Paul Wilson, were killed in Dale City, the United States, on February 2, 2010.

The probe had not revealed any ties between Pavlov's and Naydenova's murders.

According to a criminal complaint on file in Prince William General District Court, Natalia Wilson, 47, a Russian native, charged with two counts of first-degree murder in the deaths of Slavka Pavlova Naydenova, 41, and her son Paul Wilson, 8 "was jealous of her husband's relationship with Slavka."