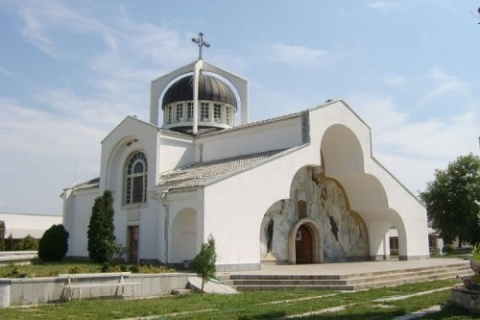 The neighborhood near clairvoyant Vanga’s church, St. Petka, is recognized as a place charged with powerful positive energy. File photo

Bulgaria's famous clairvoyant Vangelia Gushterova, known as Baba (Grandmother) Vanga is remembered Sunday with a mass served in her honor.

August 7th will mark the 15th anniversary of Vanga's death and scores are expected to gather at the "Rupite" site in Bulgaria's southwestern town of Petrich, sometimes referred to as the Jerusalem of the Balkans. Each year, the crowds include not only Bulgarian intellectuals, artists and common Bulgarian people, but pilgrims from all over the world, sometimes as far as China.

The mass will be served by the Vicar in Petrich, Angel Kolev.

Vanga was born in Petrich in 1911 and lived there until her death. She lost her sight at the age of 12 during a sudden strong storm when she was carried away by powerful winds and later found buried under a pile of rocks in a field. In 1925 she was placed at a special facility for the blind and spent three years there, but when her stepmother died, Vanga returned home to help care for her younger siblings. Soon after, her psychic abilities become known across Bulgaria and later the world. Vanga used to explain them with the presence of invisible creatures of unclear origin around her.

She died in August 1911, but the town of Petrich still feels her magic.

The neighborhood near Vanga's church, St. Petka, is recognized as a place charged with powerful positive energy. The Saturday mass will be served at this same church.