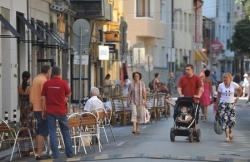 Ivan Shishman Street in downtown Sofia will be turned pedestrian for all Sundays in August. File photo by Dnevnik.bg

Ivan Shishman Street in downtown Sofia was turned pedestrian for Sundays until the end of August in a bid to reduce air pollution from traffic and favor commuting by foot.

The Sofia City Hall has decided that this Sunday, as well as the following Sundays until the end of the month, Shishman Street will be closed for vehicles under the project called "Sofia Breathes," which was launched for the first time in August 2010.

After last year's huge success, "Sofia Breaths 2011" will have a different theme each Sunday.

On August 7th, the initiative will begin with a sports festival under the motto "Breath the Game." Ten types of sports will be played on the street with the Levski sports club taking care of the nearby Gurko Street. The national male basketball team coach and coach of the year for 2009, Titi Papazov, and basketball player, Georgi Mladenov, will take part in the "Straight Shot" game. Popular artists and performers will also participate in the initiative.

The festival has a permanent program as well, where the street will be hosting art workshops, sport events, games and various performances to entertain Sofia residents and visitors.

Ivan Shishman Street, connecting the Narodno Sabranie Square in front of the Bulgarian Parliament with Graf Ignatiev street, a shopping venue for Sofia dwellers, is a favorite place among walkers in the city with its many shops and bars.