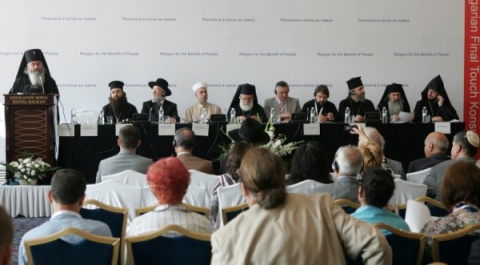 Participants in the forum "Religion for People" discuss in Sofia different ways religion can serve peace and tolerance. Photo by BTA

Sofia is slated to outshine Jerusalem by becoming a permanent host of a tolerance dialogue between different religions from all over the world.

The news was reported by the Bulgarian Standart (Standard) daily upon conclusion of the forum titled "Religion for People" which was held in Sofia's Sheraton hotel Wednesday and Thursday as a discussion of ways religion can serve peace and tolerance.

The participants decided to hold the next such meeting in October, 2012.

Another remarkable fact, as Standart point out, was the coinciding of the meeting with the holly for the Muslims month of Ramadan while Christians began on August 1 the Virgin Mary fast.

High-ranking clergy from Bulgaria and representatives of 8 other States talked about today's challenges before different religions.

The Varna and Veliki Preslav Bishop Kiril declared that when children from different religious backgrounds grow up together and study each other's religion, no one can make them later religious enemies. Archimandrite Antim from the Vidin Eparchy compared knowledge without religion to a knife which can slice the bread, but also kill a human at the same time. He cited a child from his eparchy, who said "God allowed different religions so that he could feel our love."

Bulgaria's Chief Mufti, Mustafa Hadzhi, also stressed on religious education for children, pointing out parents today need to see their offspring not just as "refrigerators that must be filled with food," but take care of their souls as well. Hadzhi pointed out existing social differences globally breed extremism, including religious one.

"Half of the world is starving while the other half advertises slimming diets. Religions must fight such discrepancies," the Mufti said.

Archimandrite Ovakimyan, from the Armenian Orthodox Church in Bulgaria, compared religious pluralism to a bouquet of flowers – the more flowers, the more beautiful the bouquet.

Panteleymon, Bishop of Xanti, Greece, spoke about the religious live in his eparchy where Christian Orthodox live peacefully together with Catholics, Muslims and Armenians while only the cemetery reminds of the former Jewish population in the city.

"But we all take care about the Jewish cemetery. Religions in the area hold regular meetings on different issues," the Bishop explained.

The only subtle sparks were exchanged between the Bishop of Cyprus Porpfiriy and the representative of Turkey's Religions Directorate, Fikret Kahraman, about who is at fault regarding events in Cyprus in 1794 and the today division of the island.

Bishop Kiril refused to sign the concluding statement with the demand the Black Sea city of Varnashould become the host of the next forum. In an open vote, the participants honored this wish and made Varna the host of the next event while Sofia was declared the permanent host of talks on religious tolerance.