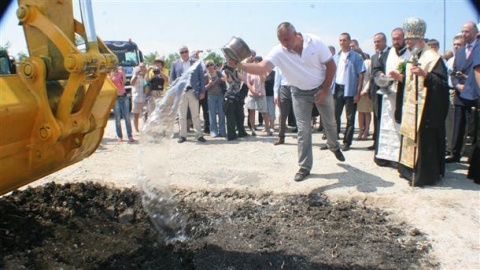 Bulgaria's Prime Minister, Boyko Borisov, during the ground-breaking ceremony for the construction of Maritsa highway in southern Bulgaria. Photo by BGNES

The ceremony took place Tuesday near the southern town of Chirpan.

The segment Orizovo-Dimitrovgrad is 31.4-km long and is part of the trans-European highway, connecting Central and Eastern Europe with the Middle East and Asia. It is scheduled to be completed in 25 months by the Italian contractor Cooperativa Muratori & Cementisti, CMC, from Ravenna.

CMC has been selected through an international public tender. The financing of over BGN 133 M is provided by the EU Operational Program "Transport."

"We launch today Maritsa highway. In December 2000, then PM Ivan Kostov broke ground here. This highway is symbolic – 31 years of construction – 31 kilometers of road," Plevneliev said, vowing monthly checks and inspections of the work of the subcontractor.

The Minister further pointed out he had promised to build 3 highways, but now 6 are in construction stage or ready to begin construction, explaining the success with good planning, priorities and hard work.

Borisov spoke as well, saying the project is materializing due to the "blessing of the patriarch, secured financing and transparent selection process."