Bulgaria to Build 'High-Speed Roads' in Addition to Highways 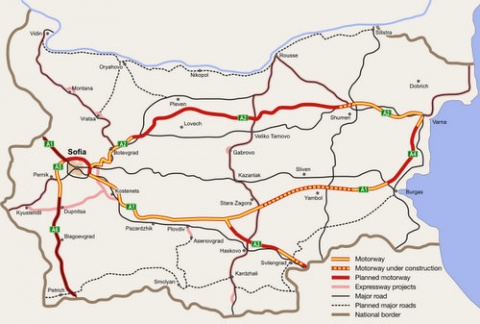 Map of the highway and major road projects in Bulgaria. Map from Wikipedia

Several of the so called "high-speed roads" will be added to the list of highways under construction as priority infrastructure projects of the Bulgarian government, according to Road Infrastructure Agency.

The Board Chair of the Road Agency Sergey Mihalev met with representatives of the Bulgarian Branch Chamber "Roads", an association of the businesses active in the field of road infrastructure.

The Road Agency Chair named several road sections around the country that are supposed to become high-speed roads – Sofia-Vidin (as an extension of the Struma Highway from Sofia to the Greek border); Ruse-Veliko Tarnovo (connecting the future Hemus Highway to the Romanian border); the "Rila Road" (from Sofia to the top mountain resort Borovetz, which was previously planned to be built as a highway); as well as beltways of the cities of Vidin, Montana, and Gabrovo.

The so called "high-speed roads" will have two lanes in each direction; however, they do not meet all requirements for being qualified as highways such as an emergency lane.

According to Mihalev, the government is already working "actively" on these high-speed road projects.

The Road Infrastructure Agency and the Bulgarian Branch Chamber "Roads" agreed Friday to set up a Consultative Expert Council for future discussions of the problems of the road construction sector, which will be meeting once a month.