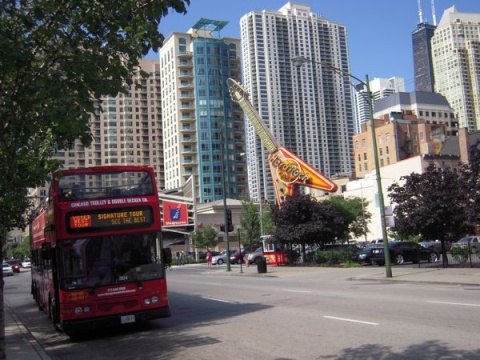 The US city of Chicago is home of the largest Bulgarian community in North America. Photo by Eurochicago.com

The news was reported by Eurochicago.com – the largest media portal in Bulgarian in America while Chicago is home of the largest Bulgarian community in North America.

The festival is co-organized by the Friends of Chicago Foundation, the Sofia City Hall and the Embassy of the United States. It aims at bringing Chicago closer to Sofia and its citizens. Held just before the 4th of July, this Festival benefits from people-to-people diplomacy to promote Bulgarian-American friendship and cooperation and to provide public support for establishing a sister cities relationship between Bulgaria's capital Sofia and Chicago.

Prof. Andreychin has been teaching at UACG since 1975. He has established two courses of lectures: "Contemporary American Architecture" (since 1992) and "History of the High-Rise Buildings" (since 2003). Recently, he has been invited to lecture at other Bulgarian Universities. Prof. Andreychin has specialized Urban Studies at the Johns Hopkins University Institute for Policy Studies in Baltimore, MD, USA, and has been a Fulbright Grantee and a Visiting Professor at the California State Polytechnic University in Pomona (Los Angeles). Since 1982, Prof. Andreychin has been a member of the International Urban Fellows' Association at the Johns Hopkins University in Baltimore.

The stress in the lecture was on the great architects' buildings in Chicago, which have changed drastically not only its skyline – they have formed the image of the contemporary cities all over the world.

On Tuesday, Ivan Sotirov, the first Consul General of Bulgaria in Chicago, lectured at the American Corner at the Sofia City Library on "Four Stars on the Chicago Flag."

Fascinated by the beauty and vitality of the city as well as by the openness and friendliness of Chicagoans, in 2010, upon his return to Bulgaria, Sotirov established the Friends of Chicago Foundation. The Foundation's goal is to initiate and facilitate direct contacts between common people from the two cities.

Other events within the frame of the festival include an award ceremony for the winners in the Shel Silverstein poems translation contest; a lecture on the great American writers and the Chicago connection; a lecture on Chicago and the US politics; the showing of a documentary about Chicago.

The detailed program of the fest can be found HERE.