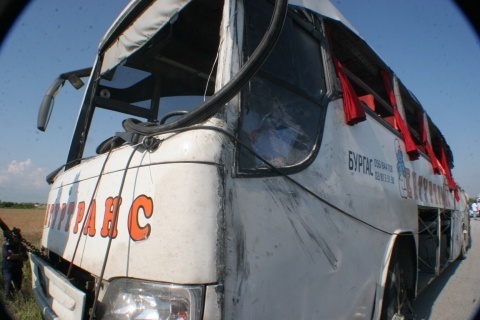 The bus was travelling from Sofia to the Black Sea city of Burgas when the crash occurred. Photo by BGNES

The driver of the Enturtrans bus company, who was behind the wheel at the time of the fatal crash on Bulgaria's Trakiya highway early on Wednesday, has been released on bail.

Svetoslav Dimitrov, 43, has been charged with recklessly causing the death of more than one person which, according to the Penal Code, is punished with imprisonment from 5 to 15 years.

Prosecutors have ruled that he is not likely to hide or commit another crime. He has been released on bail of BGN 5,000 and can not leave the country.

An Enturtrans bus, travelling from the capital Sofia to the Black Sea city of Burgas overturned and burst into flames on Trakiya highway, near the second largest city of Plovdiv, in the wee hours Wednesday, killing 8 and injuring 20, two of them in critical condition.

Meanwhile, the press center of the Plovdiv St. Georgi hospital informed on Friday that the condition of eight of the injured is improving and their lives are out of danger.

The only one remaining in critical condition is Albena Samuilova, 46, listed in the hospital in the Black Sea city of Burgas with severe head trauma and on life-support.

Two other injured passengers – an 18-year-old girl and a 21-year-old man underwent successfully surgeries on Friday.

Thursday was declared a Day of Mourning in Bulgaria for the victims of the crash.