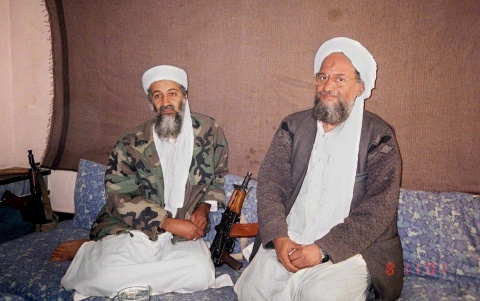 ILE) An Ausaf newspaper photograph dated 08 November 2001 shows Saudi-dissident Osama bin Laden (L) sitting with his deputy Ayman al-Zawahiri at his hide out at an undisclosed location in Afghanistan. Photo by EPA/BGNES

Egyptian Ayman Al-Zawahiri has been elected to succeed Osama bin Laden as head of the Al Qaeda terrorist organization, according to information which emerged Thursday.

Al-Zawahiri was the person most analysts expected to be announced as bin Laden's successor, since he has been his deputy for more than a decade.

The decision to appoint Al-Zawahiri was made to pay respect to the "righteous martyrs" and to honor the legacy of bin Laden, CNN reports, citing jihadist websites.

"Hereby the General Command of the Qaida al-Jihad - and after the end of the consultations -- we declare that Sheikh Dr. Abu Muhammad Ayman Al-Zawahiri (May God bless him) will take over the responsibility of command of the group," the cited statement says.

Osama bin Laden was hunted down in a US assassination raid on May 1 2011 and subsequently buried at sea.

Ten days after the assassination, former Bulgarian police executives revealed that the Bulgarian authorities failed twice to arrest Al-Zawahiri in 1995 because of legal and security reasons.