Borisov Delighted by Adriana Sklenarikova on His Birthday 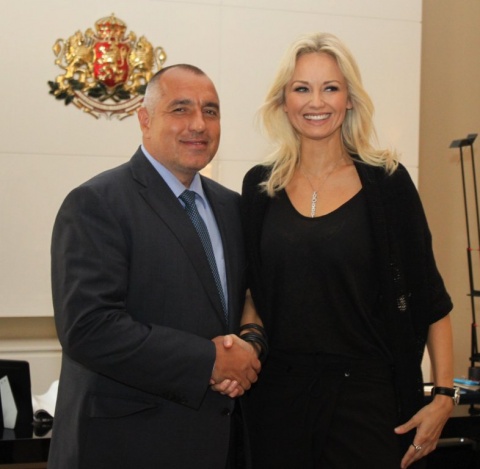 Bulgarian Prime Minister Boyko Borisov (left) received a special visit in his office for his birthday but top world model Adriana Sklenarikova, known as the model with the longest legs in the world. Photo by hilife.bg

Adriana Karembeu, a native of Slovakia who is known as the model with the longest legs in the world, was supposed to take part in a joint news conference with Borisov for the establishing of the Bulgarian Chamber of Mineral Waters.

The Prime Minister, who turned 52, however, was unable to attend, which led Adriana Karembeu to visit him in his office. (This led some Bulgarian media to note jokingly that Bulgaria is the only country where the ladies go to see the gentlemen, rather than the other way around.)

Adriana Karembeu was at Borisov's office at the same time he was greeted by Bulgarian singer Elitsa Todorova (known for making it to fifth place on the Eurovision song contest in 2007) with a group of kids who gave Borisov a white dove.

"There were other people at the meeting, who also greeted him for his birthday. He is in a good shape, he is clearly interested in history and cares to make sure that Bulgaria's virtues are recognized. I think that he is a man who wants to do a lot for his country," said the former wife of French football player Christian Karembeu.

Adriana Sklenarikova, however, did not reveal what exactly her birthday present for Borisov was.

The Bulgarian Prime Minister himself later joked in his typical style about the model's visit, seeking to deny speculations that she made her first ever visit to Bulgaria specially for his birthday.

"Sklenarikova has come [allegedly for my birthday], the woman with the longest legs... What about how many Bulgarian women have long legs? Many. I know that," Borisov stated.

"There is hardly a Bulgarian who would not treat their friends for their birthday, and I am wondering where to hide here from such speculations that Sklenarikova came because of that," he said.