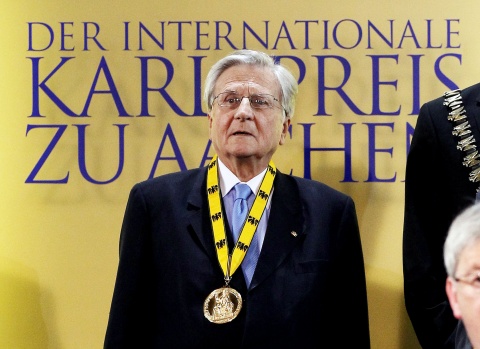 The President of the European Central Bank Jean-Claude Trichet was awarded the Charlemagne Prize in Aachen, Germany, 02 June 2011. EPA/BGNES

European Central Bank President Jean-Claude Trichet has urged the euro zone states to consider setting up a common "Finance Ministry" for the Euro Area in response to the sovereign debt crises in Greece, Ireland, and Portugal.

"Would it be too bold, in the economic field, with a single market, a single currency and a single central bank, to envisage a ministry of finance of the union?" Trichet said in a speech today in Aachen, Germany, where he accepted the city's International Charlemagne Prize recognizing contribution to European unification, as cited by Bloomberg.

According to Trichet's idea, a future euro zone Finance Ministry would not have a large federal budget but it would exert direct responsibilities in three major domains: the surveillance of both fiscal policies and competitiveness policies" and "direct responsibilities" for countries in fiscal distress; the typical responsibilities of the executive branches as regards the union's integrated financial sector, so as to accompany the full integration of financial services; the representation of the union confederation in international financial institutions.

Trichet, one of the architects of the 1993 Maastricht Treaty that created the euro who will be retiring as head of the European Central Bank in a few months, further favors giving the EU veto on budget measures of countries that go "harmfully astray," though that would require a change to EU Treaties.

The proclamation of his single Finance Ministry idea comes just as EU officials are trying to negotiate a second bailout plan for Greece as the unprecedented rescue package of EUR 110 B adopted a year ago failed to provide a lasting solution to the country's debt crisis. Ireland and Portugal have also resorted to EU-IMF bailouts.

"One way this could be imagined is for European authorities to have the right to veto some national economic policy decisions. The remit could include in particular major fiscal spending items and elements essential for the country's competitiveness," Trichet stated.

Trichet warned that the only way to protect the common currency from overspending by individual governments is to strengthen the rules against exceeding debt and deficit limits in a new way.

Even though the EU is working on proposed new rules Trichet believes they will not be strong enough.

"Looking at the Euro Area today, we see clearly that countries that abide by the rules of the single currency can thrive and prosper But we also see the opposite. Countries that have not lived up to the letter or the spirit of the rules have experienced difficulties. Via contagion, these difficulties have affected other countries... Strengthening the rules to prevent unsound policies is therefore an urgent priority," the ECB head declared.

"In this Union of tomorrow, or of the day after tomorrow, would it be too bold, in the economic field, with a single market, a single currency and a single central bank, to envisage a ministry of finance of the Union?" Trichet said.

Wolfgang Schaeuble, German Finance Minister, Jos? Manuel Barroso, President of the European Commission, and Jean-Claude Juncker, Luxembourg Prime Minister and chairman of the Eurogroup, who were in the audience were said be generally in support of Trichet’s proposal.