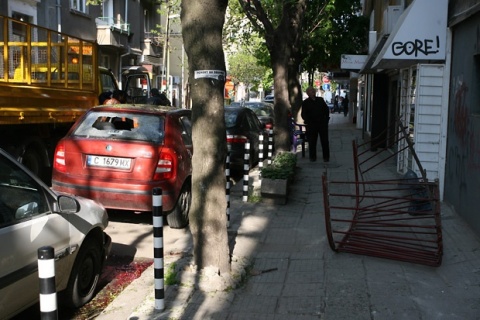 The "culprit" railing lays on a street in downtown Sofia. Photo by Sofia Photo Agency

The Mayor of Sofia, Yordanka Fandakova, vowed a thorough probe in the incident with the fallen balcony railing in downtown Sofia overnight, killing one and sending two to the hospital with severe injuries.

The probe will aim at establishing if this is the latest incident with dangerous buildings in the city, despite the existing list of such buildings, which was last updated in 2010.

The City Hall demolishes dangerous buildings, gives the owners instructions for repairs, and imposes fines to those who fail to act.

There are no instructions for the structure in case, Fandakova says, reminding control over the state of the buildings is a constant process and responsibility of district architects with permanent commissions in each district monitoring buildings and issuing directives to owners.

Chief Architect of Sofia, Petar Dikov, who went to the scene of the incident, concluded the falling did occur "with the help of the people standing on the balcony," adding the case should not be used as grounds for new mass checks since care of the buildings lays within their owners. Dikov appealed for legal sanctions for those who do not comply with instructions.

The Head of the Construction Control Directorate at the City Hall, Vladi Kalinov, is quoted by Darik radio saying the building was erected in the 40s of the last century, and it was not dangerous as a whole, but the railing must have been in need of repairs. Kalinov also stressed on the responsibility of the owners, and vowed increased control and strict application of sanctions, adding similar incidents called for a legal investigation.

"The police will now have to deal with those responsible. The City Hall cannot visit every single apartment in Sofia," he pointed out.

Prime Minister, Boyko Borisov, informed he learned about the incident from the media.

"I am truly sorry. You know in what state I found Sofia when I became its Mayor," Borisov said.