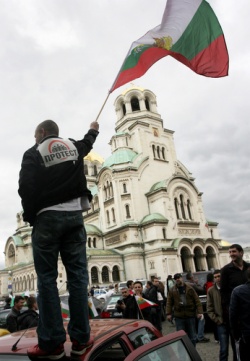 Several hundred Bulgarians rallied with their cars in downtown Sofia against the hike of fuel prices. Photo by BGNES

Several hundred protesters blockaded part of downtown Sofia Thursday rallying against what they describe as the artificially inflated prices of fuels.

Thursday's protest in Sofia was the fifth organized protest in the past few weeks, in which people from around Bulgaria staged car marches and rallies against fuel price hikes. It came just as Lukoil Bulgaria increased wholesale fuel prices.

The protesters demand that the most widely used fuel A 95 sells at no more than 2 levs per liter and fuel prices are formed in a transparent way.

Pedestrian protesters blocked briefly the Vasil Levski Blvd near the main building of the Sofia University "St. Kliment Ohridski" even though they had not obtained permission to do that causing a traffic jam. Dozens of police officers were summon on the spot to try to unclog the jam, repulsing the protesters and reporters covering the protest to one of the sidewalks.

Initially, the protesters rallied for a car march in some 300 cars at culminated at the nearby St. Alexnader Nevsky cathedral. According to the coordinators of the Facebook-based "Sila" ("Power") civic movement which is organizing the protest rallies, their car march was tightly controlled and restricted by the traffic police.

They even complained of the police recording the license plate numbers and making footage of the participants in the protest, which is seen as a major proof of the futile hopes for actual rule of law in Bulgaria.

Consumer organizations have cried out against what they see as unreasonably high prices of fuels, based on what they claim to be unfair market behavior, especially by the dominant Lukoil company.

Earlier protests took place March 14 and 27, and April 3 and 16, blocking access to some gas stations and roads.

At the end of March Bulgaria's center-right government convinced Lukoil Bulgaria to place a one-month moratorium on the increase of its gas and diesel prices as part of efforts to tame the spike in petrol costs, linked to the increase in global crude oil prices.

The agreement was reached after car marches across the country protested against recent fuel price hikes. The moratorium expired on April 23, Saturday.

Russia's Lukoil, owner of Bulgaria's only oil refinery, may agree to extend the one-month freeze on retail fuel prices, which expired during the Easter holidays, according to insiders.

Sources from Lukoil Bulgaria, who spoke to Dnevnik daily on condition of anonymity, neither confirmed nor denied rumors that the moratorium may be extended.

Transport Minister Alexander Tsvetkov was the first to hint a new freeze is likely as early as last week. He said he did not expect retail fuel prices to surge after the agreement between the government and Lukoil expires, but should this happen, the two sides will most probably agree on what he called a "grace period".

The parameters of the new agreement were not immediately clear.

Reports of a possible new agreement between Lukoil and the government have angered even more the other fuel companies, who said this would be very bad news.

The moratorium is in force for only 29% of the retail fuel market, which is the share held by Lukoil Bulgaria gas stations.

The moratorium has fueled suspicions of very close ties between Bulgaria's Prime Minister Boyko Borisov and the head of Lukoil Bulgaria Valentin Zlatev, whom the opposition has described as "the country's back seat ruler" and "the oil oligarch, who pulls the strings of the government".

The cabinet has also reduced temporarily the obligatory fuel reserves distributors are obliged to keep in a bid to drive down the end consumer price.