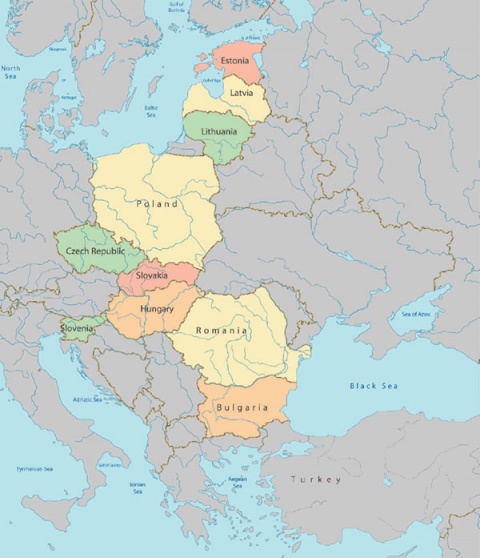 250 000 are employed in the outsourcing sector in Central and Eastern Europe with about 12 000 of those in Bulgaria, according to McKinsey. Map by transportintelligence.com

Some seven or eight new foreign companies have declared interest in starting outsourcing and offshoring operations in Bulgaria, according to Borislav Stefanov, head of the InvestBulgaria Agency.

Speaking at a conference on outsourcing in Sofia Wednesday, Stefanov cited data from a survey carried out by the McKinsey consultancy, which showed that in the past two years the number of people employed in the outsourcing sector in Central and Eastern Europe grew from 220 000 to 250 000.

Bulgaria’s outsourcing sector itself registered one of the highest growths in the region in terms of employee numbers even though the absolute figures are not that big – from about 8 000 two years ago to about 12-13 000 at present. According to Stefanov, these figures indicate that Bulgaria has a substantial potential to attract more outsourcing investments.

In his words, outsourcing is one of the seven sectors of the Bulgarian economy which harbor the greatest potential to attract foreign direct investment, according to a recent analysis of the InvestBulgaria Agency.

He said Bulgaria performs very well on the three key criteria for the outsourcing sector; namely, it has good financial stability, good economic and financial conditions, and its business environment is comparable to that of Central Europe and better than in many Asian countries.

Stefanov pointed out that Bulgaria suffers from a lack of good image not just with respect to the outsourcing industries but in all economic sectors and stressed that the Agency is working on a series of projects to promote the country as an investment destination.

According to other participants in the conference, Bulgaria has the potential to develop all three major kinds of outsourcing. At present, business process outsourcing dominates the sector in Bulgaria. The development of the type with the second largest, IT outsourcing, requires more massive investments, which might turn out to be an obstacle. Knowledge process outsourcing probably harbors the greatest potential since it has the smallest share in the Bulgarian outsourcing sector at present. Public institutions are also expected to start to contribute to the expansion of the outsourcing in Bulgaria.

While the capital Sofia at present attracts almost all of the outsourcing investment projects in Bulgaria, Experts have believe that smaller cities like Plovdiv, Ruse, Varna, Burgas, and Blagoevgrad harbor much untapped potential.