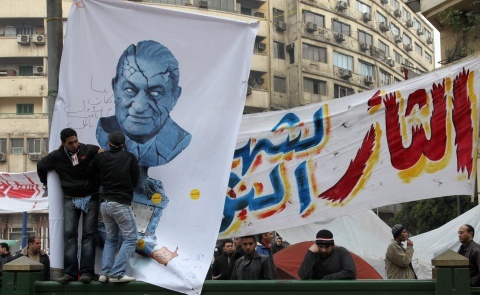 Pictured: protesters with banners showing Hosni Mubarak during the mass rallies that brought down the former President of the largest Arab country in February 2011. Photo by EPA/BGNES

Officials from Egypt's ruling Supreme Council of the Armed Forces have denied Al Jazeera reports that the country's ousted president Hosni Mubarak has left for Germany.

Egypt's ousted president Hosny Mubarak had not left for Germany despite a media report to the contrary, an official Egyptian source told the German Press Agency dpa on Sunday.

The former president is still said to be under house arrest in the Egyptian resort town Sharm El-Sheikh.

The Qatar-based Al Jazeera broadcaster had earlier reported that Mubarak had left the Red Sea resort of Sharm el-Sheikh for Germany.

The broadcaster cited unnamed sources and gave no further details.

There have been several media reports since Mubarak stepped down claiming that he had travelled abroad.

Mubarak was toppled from his post after nearly 30 years in power.