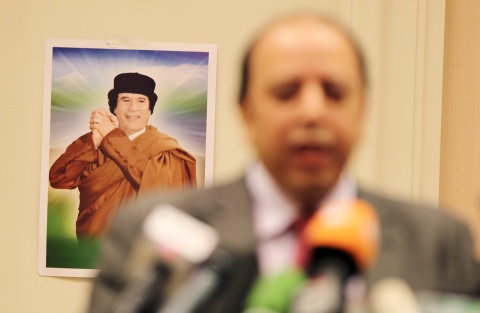 Libya has decided to suspend all military operations in a bid to protect the civilians as required by a UN resolution, passed late on Thursday, the foreign minister announced in Tripoli.

In comments broadcast live from the foreign ministry in Tripoli, Musa Kusa said the country would "respond positively" to the resolution and halt all military operations against rebel forces.

The news came hours after Libya's defiant dictator Muammar Gaddafi threatened to turn into "hell" the lives of anyone who attacks Libya and condemned any UN action as an act of 'flagrant colonisation'.

The UN Security Council approved late on Thursday a no-fly zone over Libya thus legitimizing a foreign military intervention in the fighter between Libyan dictator Muammar Gaddafi and pro-democracy rebels.

The decision made by the UN Security Council provides for a no-fly zone over Libya plus "all necessary measures" to protect civilians against Muammar Gaddafi's forces.

A total of 10 of the 15 UN Security Council members voted in favor of the resolution proposed by the USA, UK, France, and Lebanon.

While not blocking it, Russia and China, the two other UNSC members with veto power, abstained together with Germany, India, and Brazil.

From among the Western powers, Britain and France have been especially pro-active in initiating discussions on the no-fly zone, while Germany, and earlier the United States, have been more unwilling to lend support to such an initiative. The USA has shifted in favor of a no-fly zone over the recent days.

The UNSC approval paves the way for an international involvement in the de facto civil war in Libya between the loyalists of the 40-year-old regime of dictator Muammar Gaddafi, which started last month as a civil unrest aftershock from the revolutions in Libya's neighbors Tunisia and Egypt.?