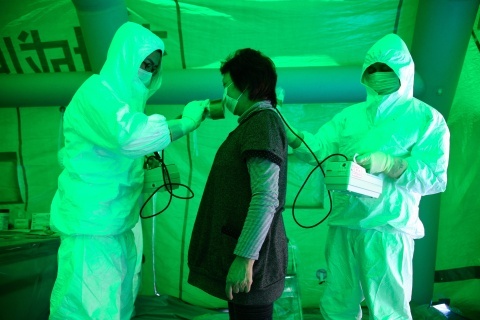 Ms Kazuko Ogasawara works for a German company in Tokyo, where she also lives. Born in the north east of Japan, her whole kinfolk lives near the nuclear plant and disaster struck area.

Milena Hristova spoke with Ms Kazuko Ogasawara about the mood in Japan, the hopes and fears of the people and what she personally experienced during the last few tragic days.

How concerned are you by the situation in your country?

I am seriously concerned for people here and elsewhere. This may be a turning point for a nuclear technology. People will rethink and move toward renewable energy.

Born in the north east of Japan, her whole kinfolk lives not so far away the nuclear plant or disaster struck area. I am so worried for them I want to go there for help, but we haven't come to that stage yet, right now they're still searching for the survivors in the debris. I can only pray for them.

Where were you during when the 9.0-magnitude quake and tsunami hit? What did you witness?

On that day, we were trying to close a deal and discussions continued through lunch hour, we were taking a break and supposed to resume the final meeting at 4:00, when all of a sudden the whole office on the 30th floor of a building started to sway. It swayed very badly like you were in a boat, you could hardly stand. When the first tremor was over, it was back to business as usual, but it didn't stop and soon continued swaying for more than 10 minutes, and then we realized it was not funny at all. No, all of us in the office were serious and we all hid ourselves down the desk and some people started to turn on the radio, when eventually the tremor subsided, we heard the announcement and had to go downstairs on foot. Walking 30 flights down was not that easy, especially because the earthquake triggered the sprinkler system and the stairway was wet.

As most of the Tokyo workers, I use trains and subways to commute, but I know that the system had gone down, and knew that it would be practically impossible to catch a taxi. So all of us started to walk back to their homes. It was like a wave of people walking down the street, in exodus, and on the way I thought of taking a bus, but that was not a good idea either because of long cues in front of bus stops and road congestion was abnormal, later I found it out that was because wives used cars to pick up their husbands (or kids from schools) and created chaotic congestion. Somehow cell phones were not working and everybody had to rely on good old public phones, again many people had to cue up in front of public phones. I left Tokyo at about 4:30 and didn't know the way but finally came home at 23:30, exhausted. But there are people who live farther away and they stayed in parks or stations and spend a night there.

Did the people in Tokyo feel like Japan's nuclear crisis is spinning out of control after workers withdrew briefly from the stricken power plant because of surging radiation levels?

We felt dejected because the power company and governments look like they are trying to cover something extremely ugly. We are wondering, what is their true intention? If something is seriously wrong, why don't they just say so, sorry is not the answer at this juncture. After all, we have to face the consequences.

Judging by your impressions how cautious are most people? Are they in panic? Do you personally plan to play it safe in the next few days? How?

No. Although people from other countries are taking it seriously. I guess there is not much we can do. We can only pray that it will not get worse, and take proper caution, like putting on a mask, avoid rains etc. If the situation really gets worse, we will not go out. But that's the utmost we can do.

Do Tokyo consumers shop for emergency supplies and protective goods such as special warming clothing as concern grows over possible radioactive exposure in downtown Tokyo?

Yes, there is a shortage of foods, I guess it's not created by the real shortage per se, but more from people stocking things. We have shortage of rice, bread, egg, toilet paper and gas. We are worried if we keep on hoarding like that, they will never get to the people who really need them. As for protective gears, every household already has one.

Have nuclear radiation fears and the threat of another earthquake in Japan prompted people to leave Tokyo?

Again, as I mentioned, people in Tokyo are calm, although some businesses are closed. I work in a German company and maybe because of that the company has moved from Tokyo to Osaka, west side of Japan.

Do you think the people have reliable information on the potential range of impact of the possible worst scenario based on the current situation at the nuclear plant?

In a way, though we have not much information as to the worst scenario, we are prepared for that. Or may be the more correct way of saying is that we pray for the failure at the nuclear power plant to be over very soon, we really hope so and pray for it to be over. Or we'll have to face whatever we have to face.

Do people blame the Japanese government and Japanese engineering for what is happening?

Not really, but the government should tell the truth as it is. They must be doing their best, but covering up doesn't make sense and it's not good for anyone.

Did you watch Emperor Akihito's address? Do you think the Japanese people will heed his advice to treat each other with compassion and overcome these difficult times hand in hand?

Yes, whether the Emperor said it or not, we've been treating each other with compassion and it is just going be more so. Overcoming difficulties is something we have done many times, not on a personal level, but as a country, and this country has no other resource but its people. We just have to do our best.