Keiko Hashimoto: I Love Japan Even Better than Before 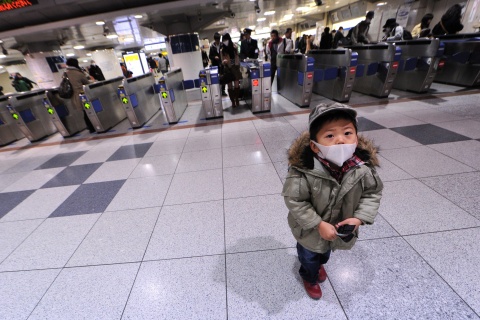 A Japanese child prepares to leave Tokyo on the bullet train (Shinkansen) at Tokyo station, 16 March 2011. Nuclear radiation fears and the threat of another earthquake have prompted many mothers with young children to leave Tokyo. Photo by EPA/BGNES

A Japanese actor and dancer, Ms Keiko Hashimoto has studied experimental possibilities of body/voice/theater from Toshiharu Takeuchi(1994-2009) acting in a number of his stages.  She has also learned butoh dance with Kazuo Ohno and Yoshito Ohno since 2000,  providing translation in the class on a daily basis. Performances: "To the island"(butoh solo, 2002), "Kyoto"(butoh solo, 2005 and 2006), "Meeting"(2005), a collaboration with a Brazilian dance/theater group Tia Tamandua, which was supported by Japan Foundation in San Paulo. She has studied "Whole-body focusing", a meditative movement therapy created by Kevin McEvenue since 2006 for herself and hopefully  for others in need in the future. Graduate of psychology, Sofia University.

Milena Hristova spoke with Ms Keiko Hashimoto about how the Japanese people are coping with the difficult situation after the deadly natural disasters and the most striking pictures she has witnessed these days.

How concerned are you by the situation in your country? Whom in particular have you been praying for these days?

I am concerned very much. I have been praying for my friends in Tokyo, friends' families in Aomori and Fukushima, and the people working to save lives, especially those working at the nuclear power plant in radiation exposure for us.

What do Japanese people hit by the natural disasters need now most?

Groundedness, centeredness. Even when we are being shaken by the ground and bombarded by information about the nuclear accident, we can still trust the ground below us to be rooted. (Maybe this is trust in life..) To be really ourselves, to avoid confusion, and to keep clear mind, we need this trust, grounding, first of all.  Also, we need to feel being connected, not being left alone. As we cannot reach physically to the people in evacuation camps, messages are read on the radio. Messages from all over Japan, from the young and the old are read for the people struck by the disaster. It is encouraging for me too. All prayers from so far away in the world are also reaching us, which is also so precious and encouraging. Sense of humor also helps. We are trying to laugh a lot in my family. Laugh and pray all together.

Did the people in Japan feel like the nuclear crisis is spinning out of control after workers withdrew briefly from a stricken power plant because of surging radiation levels?

Personally and regrettably, yes. It is really serious.

Judging by your impressions how cautious are most people? Are they in panic? Do you personally plan to play it safe in the next few days? How?

Some of my friends in Tokyo are in panic for these days. The family of one of them had a discussion and decided to stay. She wanted to go away, but decided to stay with her husband. Even in a family, views on the accident differ. Many people are trying to calm down. To calm down, some people are indulging in "daily life". Some people don't like to put up the white flag...

People are trying to buy masks even in Tokyo. Masks are getting scarce there. I sent a package to my friend in Tokyo, of dust masks, raincoats, seaweeds, wet tissue, a roll of plastic wrap, etc., praying that it will end up to be useless and laughable precaution.

I am in Kyoto, rather far from the plant (at least, further than Tokyo), and still I bought raincoats, seaweeds, etc. on the first day of the accident. I am scared.

Even in Kyoto, as it rained yesterday, I try not to go out. I had to, actually, but I left the coat, bag, mask, and goggles I wore at the door, trying not to bring in the dust.

Is fear taking hold in Tokyo too?

I think so. Some people are running away. I heard it is hard to get air tickets. I was asked to find a place to stay in Kyoto by another friend who is living in Tokyo. She has a 8-year-old grand daughter.

Do you think the people have reliable information on the potential range of impact of the worst possible scenario based on the current situation at the nuclear plant?

I think the information is controlled to avoid panic. As it is not possible for everyone to run away at once, I can allow that. Worst scenario is not talked yet on TV, radio, etc. What we are informed of is the radiation quantity measured at various locations. It is not easy to control this information as some private institutes are also watching (so I believe).

Do people blame the Japanese government and Japanese engineering for what is happening?

No, not yet. I think we are trying to focus on positive energy, avoiding negative things like anger. The first thing is to cope with fear. Anger doesn't help the current situation. I would rather pray for those working at the nuclear plant right now.

But I want to accuse those in the highest offices, the decision-makers who started and maintained this policy. The president of the power company has not yet appeared in public to say anything. I am deprived of a part of my life because of the accident and all I witnessed so far is lower-rank employees, so tired, trying to explain the situation almost in confusion themselves. Who is responsible, I really wonder. Those who build the plants and promoted the safety myth are now hiding. I have been taking the opposite standpoint for a long time and it is something, in a way, long-feared (I did not expect it to be so bad though). We have been saying that, and it happened and they never say anything...never appearing!!

Did you watch Emperor Akihito's address? Do you think the Japanese people will heed his advice to treat each other with compassion and overcome these difficult times hand in hand?

Yes, he always says something like that. But I can trust him. He is controlled by the government not to speak out too freely, but I witnessed once or twice that he said something really human, almost against the government.

Which is the most striking and moving human story that you have heard or read about how the tragedy in Japan impacted the lives of ordinary people?

Children trying to encourage and give hope. I saw on TV that junior high and high school students in Rikuzen-Takada evacuation center, made and posted a poster saying, "Let us be happy that we are alive". They were hit severely by the disaster and some of them lost their families. But they said they wanted to do what they could for other people. It was a colorful poster. In Osaka, on the day after, young people were trying to collect money, saying they wanted to do what they can for the people in suffering. Their voices were so loud and firm. I love this country better than before.