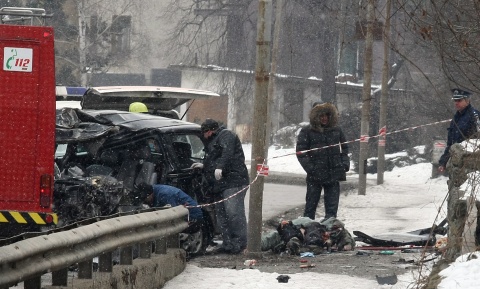 Police are searchnig the scene of a fatal crash in Sofia between a van and an SUV driven by a person with a long rap sheet. Photo by BGNES

The cause of the accident is listed as a head-on collision between a Mercedes SUV and a Kia van with Blagoevgrad tags.

A little bit after 7 am, the SUV entered opposite traffic and, after failing to reinter its lane, hit head-on the van. Two people traveling in the Kia have been killed on the spot; the other three are listed in critical condition in the emergency Pirogov hospital in the Bulgarian capital.

The area of the accident is sealed off by the police and traffic has been stopped over pending investigation and identification of the victims.

The driver of the SUV, Yosif Yosifov aka Yosko, 42, has a long rap sheet for a variety of crimes. He was one of the defendants in the high-profile kidnap case of a Croatian citizen from a in the western town of Slivnitsa. Yosifov was sentenced to two years behind bars, but later released on appeal.