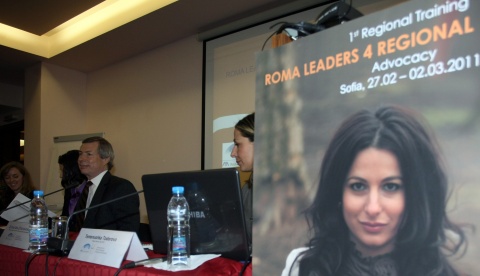 US Ambassador James Warlick at a seminar for Balkan Roma leaders. Photo by BGNES

Representatives of the EU and the USA have urged Bulgaria to fix the situation of its Roma population at a seminar for Roma leaders from the Balkans in Sofia.

The seminar on "Protection, Prevention, and Promotion of Roma Rights" brought together Roma from Bulgaria, Romania, Serbia, and Macedonia. It is organized with the financial support of the American Bar Association, Rule of Law Initiative.

According to Zinaida Zlatanova, head of the EC representation in Sofia, Bulgaria is expected to adopt measures of a comprehensive strategy for Roma integration by the end of 2011.

Zlatanova pointed out that in April 2011 the EU Roma Integration Strategy will be released, and the EU will urge the member states to come up with Roma strategies of their own for solving the problems of the some 10-12 million Roma across Europe.

"The Roma are Bulgarian citizens, they also have their rights and deserve protection that you and your organizations can provide," US Ambassador to Bulgaria James Warlick said in his address to the participants in the forum.

He stated that the Roma are probably the most marginalized ethnic group in Bulgaria and the entire region, and stressed his own commitment to the Roma issues.

"From what I have seen, the Roma community in Bulgaria does not have a "voice" of its own, which is why many of them are abused by unscrupulous people," Warlick said mentioning also that in the past years Bulgaria has been looking for a "golden solution" to the problems of the Roma but it is not so easy to find.

Bulgaria's Ombudsman Konstantin Penchev said that the Bulgarian society still has a lot to do to help not just the Roma but all poor people in the country who cannot afford lawyers and legal advise.