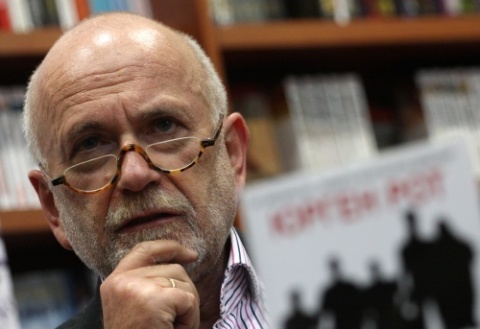 "Please, don't kill my hope for Bulgaria because if nothing changes, this will lead in its wake a political catastrophe for Bulgaria and Europe," Jurgen Roth said in an interview for the Sofia-based K2 radio. Photo by BGNES

Many people in Bulgaria hoped the new cabinet of Prime Minister, Boyko Borisov, will put an end to corruption, but are now disappointed, leading German investigative journalist Jurgen Roth writes in his blog.

Roth, who is known for his work on organized crime in Bulgaria, informs he had received very alarming news from a high-ranking banker from Bulgaria's Central Bank, BNB.

"The story is incredible, but was confirmed through inquiries to to those concerned. The matter on hand is Bulgarian State-support, through some very unconventional actions, for the powerful and shady business group known as TIM, which many media connect to organized crime," Roth writes.

The journalist says that in January of this year, the investment fund Expat Capital Sofia had asked permission from the Bulgarian National Bank (Central bank) to purchase fifty percent of the shares of the Bulgarian-American Credit Bank (BACB) in Sofia. These fifty percent are owned by an Irish bank, Allied Irish Bank, AIB, which wanted to sell those shares over financial constraints triggered by the catastrophic situation in Ireland.

The first response from the Bulgarian National Bank had been positive. For this reason Expat Capital Sofia had commissioned KPMG to carry out a Due Diligence verification.

After finding out the KPMG's report is satisfactory, Expat had submitted an offer to the Irish Bank, for the purchase of the shares for EUR 7 M. At the same time, representatives of AIB had been invited to Sofia to receive final approval for the sale of their stake. They had arrived in mid-February without even imagining what was in place for them and for Expat at the Bulgarian National Bank. They were personally received by the BNB Head, Ivan Iskrov, who explained to them it would be better if they give up the EUR 7 M and rather offer their share to the Central Cooperative Bank, and for BGN 1 – the equivalent of EUR 0.5, according to the German journalist.

"The proposal had been provided in writing to the representatives of the Irish Bank on February 23, 2011. The Central Cooperative Bank is part of the TIM group, regularly mentioned by media in connection with high-profile organized crime. What explanation is there about bankers from Ireland and representatives of Expat Capital being offered to sell the shares for BGN 1 to the TIM group, and to knock out EUR 7 M?" Roth writes.

"Obviously, the TIM group enjoys the protection of Prime Minister Boiko Borisov, who is aware, for sure, of their negative image. After all, the Member of the Parliament, Emil Radev, from Varna is from Borisov's GERB party. And he served in the same secret naval unit as the leaders of the TIM group. Was Radev employed by TIM? And why concessions for some Bulgarian ports were given to the TIM group after Borisov became Prime Minister? For the concessionaires this was a bargain, but it brings nothing to the State budget. It is a public secret in financial circles in Sofia that the Director of the Bulgarian National Bank was elected for a second term with considerable support of the TIM Group," Roth claims.

Roth was recently cleared by a Bulgarian court of charges of slander for his book about organized crime in Bulgaria, entitled "Bulgaria's New Demons."

The charges were filed by former Interior Minister, Rumen Petkov