Manu Chao to Perform in Bulgaria 9 Years after 1st Concert 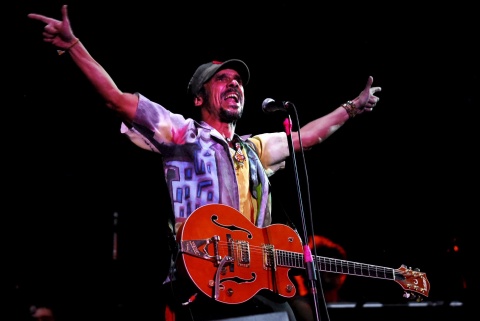 Manu Chao will stage his second cocnert in Bulgaria on April 14 at Sofia's Festivalna Hall. Photo by EPA/BGNES

World-famous singer Manu Chao will stage a second concert in Bulgaria, nine years after his first gig in the country.

The French singer of Spanish origin will perform at Sofia's Festivalna Hall on April 14, the organizers Loud Concerts have announced.

The first concert of the 49-year old musician in Bulgaria was at the Winter Sports Palace in Sofia on June 5, 2002 .

Manu Chao's music is a multi-cultural mix of musical styles, flavors and rhythms. He sings in French, Spanish, English, Galician, Arabic and Portuguese.

His music has many influences, like rock, punk, French chanson, salsa, reggae, and ska. Social problems are often integrated in his lyrics, such as immigration, living in the ghettoes, and drugs.

Some of the most popular Manu Chao's songs are "Me Gustas Tu", "Bongo Bong", "Me Llaman Calle" and "Tijuana".