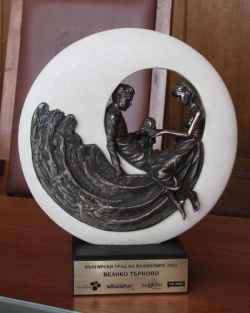 The 2011 award for most romantic city in Bulgaria went to Veliko Tarnovo. Photo by SBS Bulgaria

Veliko Tarnovo has been selected Bulgaria's first "City of Lovers" for 2011 in a radio campaign.

The campaign for most romantic city was initiated by the Bulgarian branch of SBS Broadcasting Group. In a period of one month, listeners of the group's radio stations cast their vote.

The Executive Director of SBS Bulgaria, Zhivko Kalotov, and the host of the morning show on Veselina Radio station, Desi Taseva, have presented the mayor of Veliko Tarnovo, Rumen Rashev, with the award.

"As a city with a 5000-year history and as a capital of the Second Bulgarian Empire, Veliko Tarnovo proved that historical heritage and unique atmosphere carry genuine romance," Kalotov said.

This was the first "City of Lovers" campaign organized in Bulgaria. The next edition is expected to be held in 2012.