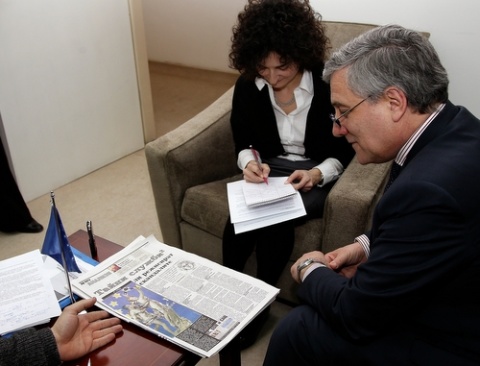 EU Commissioner Antonio Tajani (right) looks at a photo collage from the 24 Chasa daily showing Solomon and Gergana Passy, inventors of the common charger idea, as a statue of ancient gods holding the prototype.

EU Commissioner for Industry and Entrepreneurship has recognized Bulgaria's contribution to the creation of common mobile phone chargers - an idea which originated with former Bulgarian Foreign Minister Solomon Passy and his wife Gergana.

Last week, the European Commission unveiled in Brussels the prototype of a common charger for all data enabled mobile phones to be sold in the European Union. The prototype was presented by Tajani and Bridget Cosgrave, Director-General of Digitaleurope, the largest association of European digital technology industry.

Thus, within weeks, as the common charger hits the EU market, data-enabled mobile phones from different brands will be able to use the same charger.

The adoption of the common universal mobile phone charger has multiple benefits including eliminating the inconveniences caused for users from the fact that they have to discard an old charger each time they buy a new mobile phone but most importantly reducing substantially the amount of electronic waste and greenhouse gas emissions.

The idea for the common charger originated with Solomon Passy, President of the Atlantic Club of Bulgaria, former Foreign Minister (2001-2005), and former Chairman-in-Office of the OSCE in 2004, and his wife Gergana Passy, former Deputy Foreign Minister and Foreign EU Affairs Minister (2007-2009), back in the spring of 2008.

The Passy family started their initiative with a letter to then EU Commissioner for Industry Guenther Verheugen, who welcomed the idea.