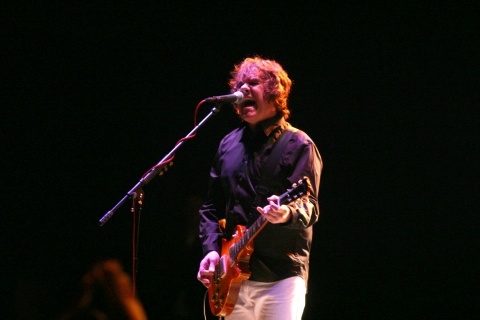 Gary Moore is pictured here during his performance to remember in Sofia, September 2007, when he changed five guitars and thrilled more than 3 000 fans. Photo by Sofia Photo Agency

The renowned rock guitarist Gary Moore has died in a hotel room in Spain. He was 58.

There was no immediate information about the cause of his death.

Moore was originally from Belfast and was a former member of the legendary Irish group Thin Lizzy.

The Northern Ireland guitarist was only 16 when he moved from Belfast to Dublin in 1969, to join Skid Row, which featured Phil Lynott as lead vocalist.

He was later brought into Thin Lizzy by singer Phil Lynott to replace the departing Eric Bell, another guitarist from Northern Ireland.

The lead guitarist received critical acclaim for his work on the 1974 Thin Lizzy album, Nightlife, but would never be constrained by the music group format.

A year earlier, he had released his first solo album Grinding Stone and his virtuoso playing was to make him a recognized artist in his own right.

Although returning to Thin Lizzy briefly in the late 1970s, his solo work continued to garner interest and he also enjoyed UK chart success with Lynott, via singles Parisienne Walkways and Out In The Fields.

He performed on stage with a range of major artists and released 20 studio albums.

Gary Moore staged a performance to remember in Sofia's National Palace of Culture in September 2007, changing five guitars and thrilling more than 3 000 fans.

Over two hours, Moore played some of his greatest hits, including "Still Got The Blues" and "Pretty Woman", but the playlist as a whole charted the development of the blues as a musical genre.

Even the less-than-perfect acoustics of the hall could not get in the way of a glorious performance and Moore's characteristic guitar solos.

The gig fully made up for the four-months delay, with fans forced to wait for the next window in Moore's busy schedule after he cancelled his concert scheduled for May.

The guitarist was scheduled to play a free concert in Sofia's downtown Battenberg Square as part of Bulgaria's celebrations of Europe's Day, but withdrew after catching a viral infection.