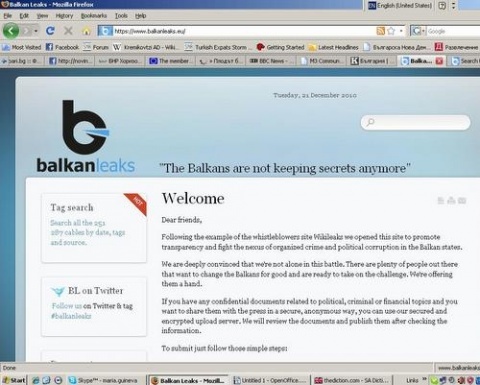 The announcement comes just hours after it was reported that all ministers and Members of the Parliament from the ruling, center-right Citizens for European Development of Bulgaria (GERB) party have received as a gift a brand new iPad.

"Tanovgate" is the first book from the series iSRS, authored by the Interior Ministry and the State Agency for National Security (DANS), Balkanleaks say.

The book includes all short-hand notes from recordings of conversations between the Customs Director, Vanyo Tanov, and key political figures, except the one with the GERB Member of the Parliament, Menda Stoyanova, Chair of the Parliamentary Committee on Budget and State Finances, because the sound file here remains a mystery.

The discrediting recordings have been released in portions by the Bulgarian "Galeria" weekly and the conservative Order, Law and Justice (RZS) party all through the month of January, stirring a large-scale political scandal in Bulgaria.

Electronic books have many advantages over paper copies, such as a convenient menu to access the notes; search by key words and bookmarks for interesting paragraphs from the text.

The second book from the series will be "Tsonevgate," with the notes from the special surveillance devices' recordings of conversations between Sofia City Court judge, Petar Santirov, and financial consultant, Tencho Popov, defendants in the bribery case against former Defense Minister, Nikolay Tsonev.

In order to install "Tanovgate" on iPad or iPhone one must follow the instructions here https://www.balkanleaks.eu/tanovgate.html, download the file, open iTunes and with the mouse drag the file on the iTunes window, Balkanleaks explain.

If the iPad has the electronic book reader Stanza installed, "Tanovgate" can be downloaded directly from the iPad by opening the same link in the browser and then open the file with Stanza.