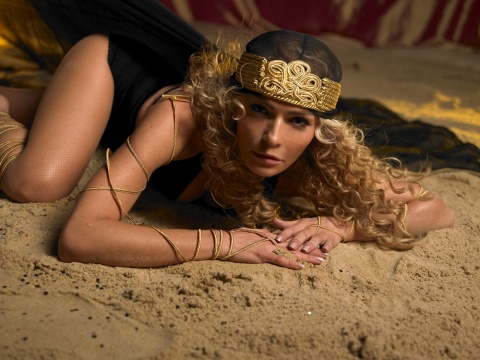 Twelve musicians, backing vocalists and dancers will join Ishtar for her three concerts in Bulgaria in June. Photo by BGNES

Israeli-born ethno-pop singer Ishtar will arrive with a crew of 12 musicians, backing vocalists and dancers for her three gigs in Bulgaria, the organizers of the concerts, ART BG, announced.

The three performances will be staged in Varna on June 3, Sofia – June 5, and Plovdiv – June 6, 2011. Ishtar has promised not only a rich repertoire, but also a grand show with attractive costumes and stage decors.

According to the organizers, the singer might make an earlier visit to Bulgaria to present some of her new songs and to clarify details for her concerts in June.

However, her schedule is currently busy with promotions of a new movie with her participation. Details are yet to be announced.

The June gigs will not be Ishtar's first visit to Bulgaria. She performed in Varna and in the Sunny Beach resort in 2004 and in Sofia in 2006.

The singer began performing in clubs at age 14. Though she was born Eti Zach, she chose the name "Ishtar", which is the name of a Mesopotamian Goddess.

The Israeli pop diva is best known for her work as the front vocalist of the French-based band Alabina, and for her solo hits Last Kiss, C'est la vie and Habibi (Sawah).

The music of the 42-year-old singer is a mix of Oriental pop and traditional Arabic sounds and dance beats. Her songs are in French, Arabic, Spanish, English and Hebrew.