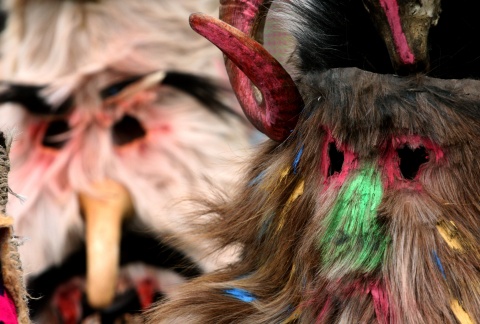 The horrific masks of the kukeri are designed to scare away evil spirits. Photo by BGNES

The 20th edition of Bulgaria's largest and most impressive "Kukeri" event – the Surva Festival in Pernik – broke all of its previous attendance and participation records.

A total of 6 207 – more than at any past edition of the festival – mummers, or "kukeri", a beloved Bulgarian folklore tradition with roots in Ancient Thrace, participated in the three-day event – Jan-28-30, 2011; dozens of guests of the city watched their dances and rituals.

The participants were from 103 carnival groups from across Bulgaria and from 8 foreign countries – Macedonia, Serbia, Italy, Spain, Ukraine, Palestine, Pakistan.

The Surva Festival, which first took place in 1966 as a cultural event based on Bulgaria's folklore traditions, is the largest carnival event in Bulgaria and the Balkans.

In 2010, Pernik was declared an European capital of kukeri traditions by Henry Van Der Kroon, President of the Federation of European Carnival Cities.

Tanya Bakalova, a representative of UNESCO, has announced that the kukeri tradition and the Surva Festival in Pernik will be included in UNESCO's list of protected non-material cultural heritage once the respective procedure is completed.