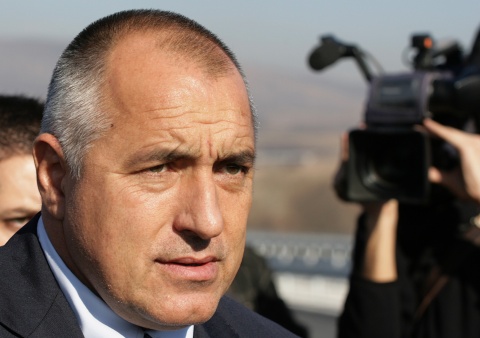 Bulgaria's PM Boyko Borisov said he was prepared for the attacks with tapped conversations, but when he knew about them, they were much more small-scale. Photo by BGNES

The attack is against me, but they just did it gradually to destabilize, break and wedge apart ministers and make the government an easy pray, Bulgaria's PM Boyko Borisov said Thursday.

"When I knew about these things, they were still small-scale," Borisov commented on the latest publications of conversations between him and the Customs Agency head, Vanyo Tanov, where he is allegedly heard speaking of the need to restore to work a friend of his at Sofia airport.

"If I wanted to give this person's career a push or to make him important, I would have put him on a key position. I would call [Finance Minister] Simeon Djankov and tell him "You will put him there", rather than "Check this case." We are talking about one person and the lowest position in the Customs," Borisov said.

He asked why the media does not publish his conversations for three or six months, so that people could see "how principled and uncompromising we are," in his words.

"They select one or two conversations, which they also manipulate, because this is of their advantage," Borisov said.

The prime minister expressed his certainty that when the expert checks are announced, they would prove that the conversations were manipulated.

"You will see that the official information will state that any conversation that I have is later prolonged by 120-130-150 seconds. And then certain words appear that aim at disgracing us," Borisov said.

In his words, since he is the one who appoints the deputy prime minister, finance minister, customs agency head and his deputies, he could as well appoint the said person at one of these positions.

"I did not appoint him at his position. He worked there since the previous government," Borisov said.

The tapes were released earlier this month at a news conference, again held by by the Galeria weekly, a paper believed to be the mouthpiece of Aleksei Petrov, former special agent of the State National Security Agency DANS, (currently under house arrest), who has been investigated on organized crime charges since his detention in the much advertised "Operation Octopus" in February 2010.

At another press conference earlier in January, Galeria released a tape of a conversation between the Prime Minister and the Customs Director, alleging Borisov provided a cover-up for the owner of the "Ledenika" beer company, Mihail Mihov.

In another tape, Tanov can be heard telling his Deputy, Antoniy Strandzhev, to keep the documents secure while he is away. Strandzhev insists the recordings are true and he had such phone conversation with his former boss.

The Galeria weekly has also released other discrediting recordings of phone calls between Tanov, Finance Minister, Simeon Djankov, and his Deputy, Vladislav Goranov.

Customs Agency head Tanov's initial comments to the new tapes were that he does not remember any particular names being mentioned in his numerous conversations with Prime Minister, Boyko Borisov.

A former employee of Bulgaria's National Agency for State Security (DANS), Rosen Milenov, who claims that the tapes are authentic, and Customs Agency head Vanyo Tanov were interrogated late Tuesday evening by the Parliamentary Subcommittee for Special Surveillance Devices Control but the interrogations have not produced any definitive and official conclusions yet.