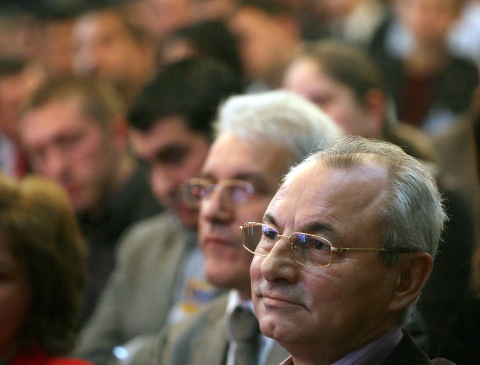 According to the chargers, ethnic Turkish leader, Ahmed Dogan (front), has been involved in large-scale political corruption schemes, has breached the conflict of interest provisions and has served private interests. Photo by BGNES

On October 18 2010, a three-member team of Bulgaria's Supreme Administrative Court exonerated Dogan from conflict of interests.

Two of the three magistrates trying the case, ruled Dogan, who received huge consulting fees on hydro energy projects while his party was in power, was not in conflict of interests because his consulting contracts were signed before the passing of the law that provides for sanctions for such activities.

The VAS ruling further says that there is no evidence the DPS leader as a Member of the Parliament, took part in a vote benefiting the company which paid the fee.

The third magistrate, however, signed the ruling with "particular judgment." She wrote that Dogan has committed conflict of interests because he received the major part of the fee after the passing of the bill that mandates him to declare such conflict.

The Court ordered the Parliament to refund legal expenses to Dogan. His defense attorney asked for BGN 48 000, but the magistrates fixed the amount at the symbolic BGN 150.

The trial was launched on a claim filed by the Parliamentary Anti-corruption Committee, which is also appealing the first VAS ruling.

The leader of the ethnic Turkish party, which was a member of the former Three-Way Coalition cabinet, allegedly pocketed BGN 1.5 M as a consultant of four large-scale hydroelectricity projects, funded by the state – "Tsankov Kamak," "Dospat," "Gorna Arda" and "Tundzha" Dam.

The scandal erupted in May after a visit of Prime Minister Boyko Borisov to the site of the hydroelectric power plant "Tsankov Kamak," where he revealed that a huge hike in the initial price has been discovered.

The money for the hydro power plant "Tsankov Kamak," from where Dogan took the sky-high payment as an "expert," was paid by the state-owned National Electricity Distribution Company (NEK), left in tatters after the ruling of the previous cabinet.

At the start of proceedings at the Supreme Administrative Court on September 2 officials had to try Dogan in absentia.

The latest embezzlement allegations against Ahmed Dogan were widely considered to be a litmus test for the government's willingness to fulfill its election promises to bring to justice those involved in huge-scale corruption schemes.