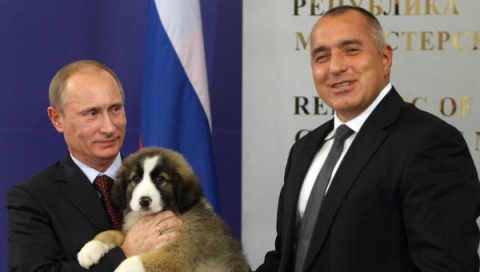 The godfather of Putin's new adorable friend is 5 year-old Dima Sokolov from Moscow, who has sent his suggestion to the President via email. Dima and his parents were invited to Putin's residence in Novo-Ogarevo, where the prime minister introduced Dima and Buffy to each other.

Putin praised Dima's name choice and presented the boy with a soccer ball, saying that he should practice in anticipation of the FIFA World Cup in 2018, which will be hosted by Russia.

Meanwhile, Buffy has been growing very fast and thrives in his new home. He can already respond to commands, such as "Sit!", and has been getting along pretty well with Putin's other dog – the 11-year old female Labrador Connie.

The Russian PM received the puppy as a gift from his Bulgarian counterpart Boyko Borisov on November 13 2010, when he was on a high-level visit to Bulgaria. Putin's endearing attitude to the little creature quickly became a favorite topic for pundits around the world.

Afterwards, Putin asked all Russians to help him pick a name for the furry creature.

The Bulgarian shepherd dog is an extremely rare breed which originated in Bulgaria as a large, massive mountain livestock guardian dog.