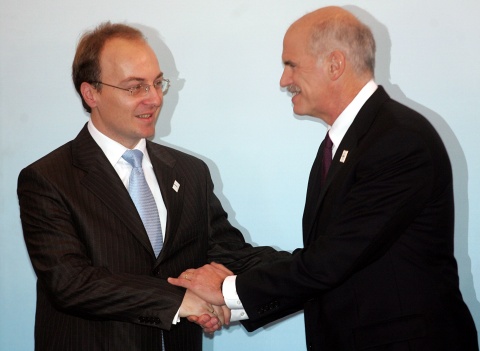 Macedonian Foreign Minister Milososki (left) with Greek PM Papandreou during an OSCE meeting in Athens in 2009. Photo by EPA/BGNES

The letter submitted by Milososki to Droutsas does not mention the notorious name dispute between Macedonia and Greece, which is the reason Greece vetoed Macedonia's NATO accession in 2008, and has been hindering the start of Macedonia's EU accession talks.

Greece is the reason Macedonia is listed in the UN not as "the Republic of Macedonia" but as "the Former Yugoslav Republic of Macedonia; as the administrative region in Northern Greece is also called Macedonia, Greece is concerned that recognizing its northern neighbor under the same name would fuel territorial claims. EU and US efforts for mediating and resolving the name dispute have failed over the intransigence of the two parties.

In his letter to Droutsas, Milososki technically asks the Greek Foreign Minister for support for Macedonia's EU bid in light of the coming meetings of the Council of the European Union and the European Council.

He reminds that the European Commission has confirmed in the 2010 Enlargement Package the recommendation for starting accession negotiations with Macedonia.

Here is the full text of Milososki letter to Droutsas as published in English by the Macedonian Information Center:

I avail myself of this opportunity, in the light of the upcoming meetings of the EU Council and the European Council in December 2010, to ask for your support for the adoption of a decision for start of accession negotiations of the EU with the Republic of Macedonia.

As you know, in the 2010 Enlargement Package the European Commission renewed its recommendation for opening of accession negotiations with my country, recognizing our achievements in the past year and reaffirming that we remain ready to face the challenges of the next stage of the accession process.

My country has been qualified for start of accession negotiations for two consecutive years and has been a candidate country without opening accession talks for five full years. This situation is unsustainable both for a candidate country that will next month establish full trade association with the EU under the Stabilization and Association Agreement as well as for the credibility of the EU and its enlargement policy.

Republic of Greece as the oldest member state of the European Union in our region and declared friend of the enlargement policy, through the Thessaloniki Agenda and today with the initiative Agenda 2014/2018, could significantly contribute to the revitalization of the European integration of the whole region. Your support to the adoption of a decision to start the accession negotiations with the Republic of Macedonia will create the necessary political impetus to this end. With such a step, we together will also stimulate the necessary positive climate of confidence in our mutual relations for permanently resolving the remaining bilateral difference with a sustainable solution acceptable for the both countries and peoples, in the interest of the regional and European stability and prosperity.

Please accept, dear colleague, the assurances of my highest consideration.