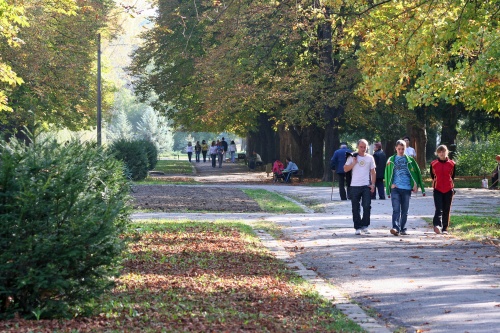 Bulgaria has been having almost summer temperatures in the past days. Photo by BGNES

Bulgaria registered record-high temperatures in 28 towns and cities on Wednesday, according to data from the National Institute for Meteorology and Hydrology (NIMH).

The highest temperatures in Bulgaria on Wednesday was measured in the city of Plovdiv – 28 degrees Celsius, followed by the city of Pleven – 27,9 degrees, and the town of Lom – 27,8 degrees.

According to the data, by 2:00 pm, the temperature in the city of Silistra was 26,6 degrees. For comparison, the previous record-high temperature on this date was measured in 1971 and it was 21 degrees.

However, Wednesday's temperature was not an absolute record-high for Silistra. The record was measured on November 14, 1969 and it was 27,7 degrees.

According to data from the meteorological observatory, the average annual temperature in Silistra increased by 2 degrees for the past 60 years.

Veliko Tarnovo, Burgas, Varna, Vidin, Svishtov, Dobrich and Pazardzhik were also among the cities that registered record-high temperatures on Wednesday.

Meteorologists said that they expect temperatures to go down by several degrees in the next days.