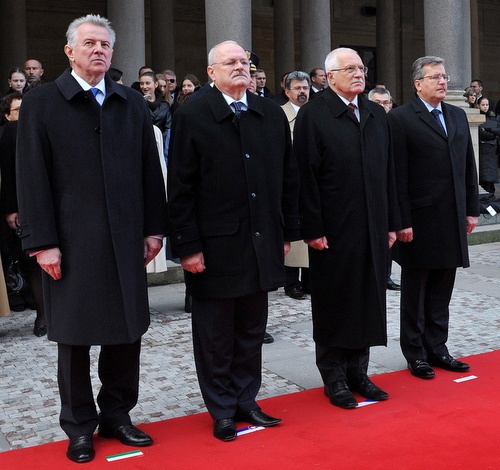 (L-R) President of Hungary Schmitt, of Slovakia Gasparovic, of the Czech Republic Klaus, and of Poland, Komorowski during the welcoming ceremony of Summit of the Presidents of the Visegrad group. EPA/BGNES

The Visegrad Group – made up of the Czech Republic, Hungary, Poland, and Slovakia – has declared itself for a common EU policy on the integration of the Roma minorities in the European states.

The presidents of the four countries from the Visegrad Group, also known as the Visegrad Four, or V4, founded in 1990, Vaclav Klaus, Pal Schmitt, Bronislaw Komorowski and Ivan Gasparovic attended a two-day summit in the Czech resort town Karlovy Vary.

They believe the way to solve the problems with the integration of the Roma is to act on European level.

"It is necessary to find a joint philosophy of the issues. Individual countries are unable to solve the issue alone within a short time," said Slovak President Ivan Gasparovic, as quoted by Ceske Noviny

Three of the four Visegrad countries – with the exception of Poland – have sizable Roma populations that official estimates put at 1.5 million combined (though unofficial figures might be higher.

The Slovak head of state, however, was critical with respect to the lack of will on part of the Roma community to "take up the hand" extended to them.

He said it is necessary to teach the Roma to accept the offered help as a form of cooperation in which they themselves must actively participate.

Hungarian President Schmitt in turn said must be fully-fledged citizens with all rights and duties, and pointed out Hungary was the only EU country to have a Roma MEP, the Ceske Noviny reports.

During the V4 summit in Karlovy Vary, Klaus, Schmitt, Komorowski and Gasparovic also held talks on energy issues and on coordinating the measures of the Hungary and Poland EU presidencies in 2011.