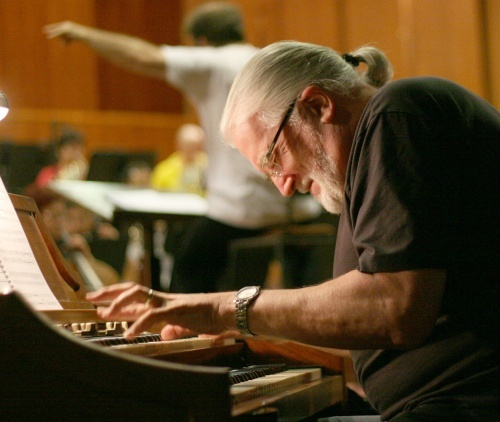 The reason for Lord's early arrival are the rehearsals with the Sofia Philharmonic Orchestra and the musicians from the Bulgarian band TE ("They"). The joint production will be the second one, after last year's unique concert in the Bulgarian city of Plovdiv.

Despite the rainy weather on Thursday, the musicians said that Sofia is a lovely city and he could not wait to meet his colleagues and start rehearsing.

Lord also said he was eager to meet again Nayden Todorov from the Sofia Philharmonic Orchestra, who conducted last year's concert. The composer has expressed his admiration for the orchestra, the talent and the hard work of the Bulgarian musicians.

The organizers of the event have announced that the rehearsals will take several hours a day and will be very intense, but will guarantee the great result for the show on October 30.

Lord has said he could not wait to meet again the Bulgarian audience, which gave him a warn and emotional welcome a year ago. The composer said he felt great in Bulgaria and promised a wonderful concert.

Jon Douglas Lord, who was born in England on 9 June, 1941, is a famous composer, Hammond organ and piano player.

He is recognized for his Hammond organ blues-rock sound and for his pioneering work in fusing rock and classical or baroque forms. He has most famously been a member of Deep Purple, as well as of Whitesnake, Paice, Ashton & Lord, The Artwoods and Flower Pot Men.

In 1968, Lord co-founded Deep Purple. He and drummer Ian Paice were the only constant band members during the band's existence from 1968 to 1976 and from when they reformed in 1984 until Lord's retirement in 2002.

In 2002 he retired from Deep Purple for good, to concentrate on composing. In 2008, he achieved success as a classical composer when his Durham Concerto entered the classical album charts.