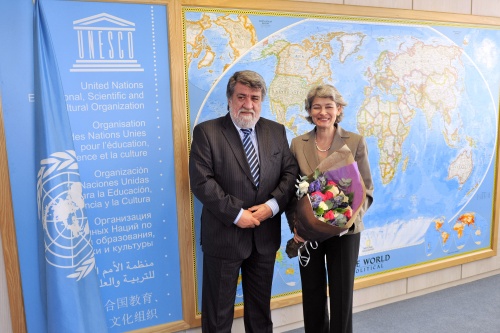 The Director General of UNESCO, Irina Bokova, and Bulgaria's Culture Minister, Vezhdi Rashidov (L), at the UNESCO headquarters in Paris. Photo by BGNES

The Director General of UNESCO, Bulgaria's Irina Bokova, announced she wanted works of famous Bulgarian painters to be the decoration of her office.

Bokova made the statement after the conclusion of her official meeting with Bulgaria's Culture Minister, Vezhdi Rashidov, in Paris at the UNESCO headquarters. The idea of the paintings was voiced by Rashidov himself.

In addition to Bokova's office, Bulgarian masterpieces would be displayed in UNESCO's halls while a work of a Bulgarian sculptor will be placed in the building's yard along with those of other renowned artists from around the globe.

On Monday, Bokova and Rashidov signed an Agreement for the establishment of a Regional Center for the Preservation of Southeastern Europe's culture heritage in Bulgaria's capital Sofia.