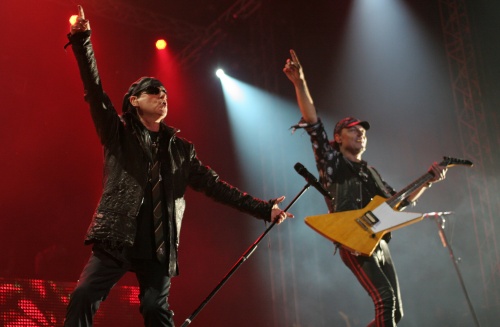 Legendary rock band Scorpions had their last concert in Bulgaria on October 25. Photo by BGNES

Rain and bad weather did not stop more than 15,000 people to go and see Scorpions live for the last time at the band's farewell concert in Sofia Monday night.

The concert began with a performance of the Bulgarian rock band Ahat. One hour later, the legendary German rock band appeared on stage.

They said goodbye to their Bulgarian fans performing one of their most emblematic songs like "Wind of Change," "Holiday," "Rock You Like a Hurricane" and "Still Loving You," as well as as very special "Happy Birthday" to the group's guitarist Matthias Jabs.

At the end of the show, among loud applause from the audience, Scorpions came out for an encore, wrapped in a Bulgarian flag, thrown on stage by a fan.

The Sofia gig was part of the band's farewell "Get your sting and Blackout World Tour," which kicked off in March in Prague and then went on to Europe, the USA and Latin America, before returning to Europe for the fall.

Besides writing seminal pages in the history of rock and heavy metal, the Scorpions have had a special relationship with Eastern Europe, with their song "Wind of Change" (1990) immortalizing the fall of communism. They are the second Western rock band ever to have ever played in the Soviet Union, with a 1988 show in Leningrad.