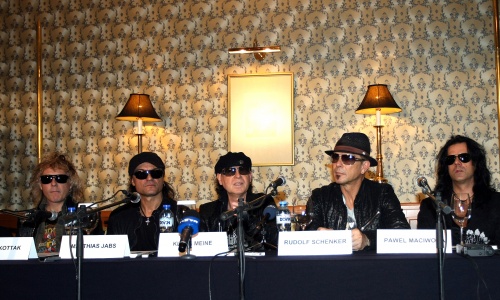 Scorpions duriong the press conference in Sofia, prior to their farewell concert in Bulgaria. Photo by BGNES

Legendary rock band Scorpions will have their farewell concert in Bulgaria on Monday.

The show in Sofia will be part of their farewell "Get your sting and Blackout World Tour."

The concert in the Bulgarian capital was initially scheduled for October 9. However, it was canceled because of a serious illness of singer Klaus Meine that prevented the band from playing a prior date in Athens.

"This is a celebration for the 40th anniversary of Scorpions and we are here to rock Bulgaria. We feel great," the band said in a press conference in Bulgaria.

The group said that the beauty of their music was the fact that the young generation likes it too. They also pointed out that the change began 20 years ago but it is still ongoing today.

"When we play tonight, we will feel as one, like we are all brothers," the musicians said.

They have compared their decision to end performing with the winning of an Olympic medal for the athletes.

After releasing the critically-acclaimed "Sting in the Tail" album earlier in 2010, the Scorpions decided to call it quits.

The farewell tour kicked off in March in Prague and then went on to Europe, the USA and Latin America, before returning to Europe for the fall. The tour is set to continue beyond 2011.

Besides writing seminal pages in the history of rock and heavy metal, the Scorpions have had a special relationship with Eastern Europe, with their song "Wind of Change" (1990) immortalizing the fall of communism. They are the second Western rock band ever to have ever played in the Soviet Union, with a 1988 show in Leningrad.