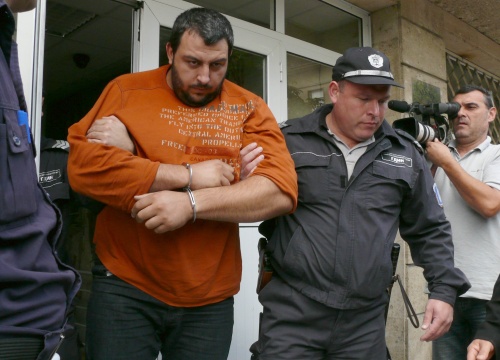 Petar Stoyanov, aka The Chieftain, has been left in the arrest for the duration of the investigation against him. Photo by BGNES

The President of the Bulgarian Sumo Wrestling Federation, Petar Stoyanov, aka "the Chieftain", was left in permanent detention on suspicions that he led an organized group of paid assassins.

For the past two months, Stoyanov and four other men, suspected of participating in the organized crime group known as "Killers", have been on and off in the arrest as courts have released them on bail claiming the prosecutors and the police failed to present sufficient evidence for permanent detention.

However, on Saturday, the District Court in the northeastern city of Shumen ruled in favor of keeping Stoaynov behind bars.

The Chieftain was arrested three days ago in the Tokuda hospital in Sofia based on new evidence. Interior Minister Tsvetan Tsvetanov suggested he was trying to evade the detention based on fake medical grounds.

In Shumen, the sumo wrestler is investigated for the murders of local businessman Rumen Rashev, the Veliko Tarnovo lawyer Petar Lupov, and Sofia energy businessman Borislav Georgiev, a close associate of energy tycoon Hristo Kovachki. In Sofia, Stoyanov is under investigation for the murder of football club president Yuriy Galev. His additional charge is of organizing and heading an organized crime group.

On August 3, 2010, the Appellate Court released 4 of them, including the Chieftain and Vasil Kostov aka Vasko Ketsa (The Sneaker), over lack of evidence, and left under arrest only Medoti Ivanov, on charges of illegal gun ownership.

On August 9, one of the four – Georgi Petkov aka Dachi was arrested on different charges.

On Saturday, the Chieftain's lawyers argued for his release on health grounds.

The Shumen Court did accept that Stoyanov had high blood pressure and diabetes but said these diseases can be treated in the arrest.

The lawyers did attack the judges vehemently accusing them of carrying out the order to the Justice Minister and the executive as a whole.