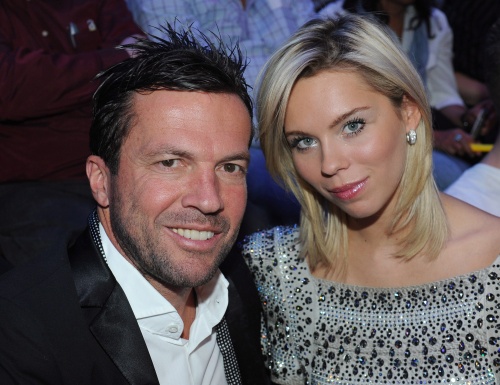 Former German soccer player Lothar Matthaeus (L) and his wife Liliana (R) pose for photographs as they attend a RTL TV in 2010. Photo by EPA/BGNES

This has been announced by Borislav Mihaylov, head of the Bulgarian Football Union, after the meeting of the Union’s executive committee Tuesday afternoon.

The contract of Matthaeus with the Bulgarian national football team will be for two years with an option to be extended depending on his accomplishments on the new post.

“It was not easy at all to find a new coach in such a short period of time and I am very glad that we managed to do it. I hope that everybody will be supporting him,” Mihaylov declared.

The Bulgarian football authorities have had to seek a new coach after the resignation of Stanimir Stoilov who led the team for about two years.

Stoilov resigned as the national team failed to qualified for the 2010 World Cup in South Africa, and then suffered humiliating losses in their first two matches from the Euro 2012 qualifications at the beginning of September – 4:0 from England in London, and 0:1 from Montenegro in Sofia.

The crisis in the team deepened in the spring of 2010 when its star striker, Manchester United's Dimitar Berbatov, decided to call it quits. After the crushing losses from England and Montenegro, its other key player, Aston Villa's sweeper Stiliyan Petrov was also rumored to be preparing to leave the team.

As Stoilov quit, senior officials of the Bulgarian Football Union said there was no way the organization could afford to pay at least EUR 1 M per year to a foreign coach.

Mihaylov has provided no details on how and why the Bulgarian Football Union managed to contract the German specialist. Matthaeus will be living in Bulgaria during the meetings and drills of the Bulgarian national team.

Mihaylov, the most successful Bulgarian goalkeeper of all time, and Matthaeus know each other well as both were long-time players of the national teams of their countries, including the quarter-final match between Bulgaria and Germany during the 1994 World Cup in the USA where Bulgaria won 2:1 claiming subsequently the bronze medals.

He is the most capped German player of all time, retiring with a total of 150 appearances (83 of them when the team was called West Germany) and 23 goals for the German national team. Matth?us is a member of the FIFA 100 – a list of 125 of the greatest living football players chosen by Pel?. Maradona said about Matth?us "he is the best rival I've ever had. I guess that's enough to define him" in his book Yo soy el Diego (I am Diego)

During his career, he usually played as an Attacking Midfielder or Defensive Midfielder, although later in his career he played as a Sweeper. He was renowned for his perceptive passing, positional sense, and well-timed tackling, as well as his explosive shot.