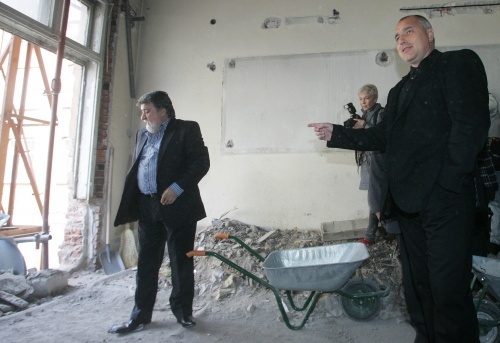 PM Borisov (right) and Culture Minister Rashidov (left) seen at the abandoned building of the Sofia Technical University during the groundbreaking ceremony for what is to become the “Bulgarian Louvre” museum. Photo by BGNES

Yanko Apostolov, a Bulgarian architect, living in New York, has been selected as winner in the public tender for the new museum complex in the capital Sofia, known as the Bulgarian Louvre, the culture ministry announced.

"Bulgaria deserves a first-class museum, which help it put the Bulgarian art on the world map," Aposotol, who did not attend the opening of bids on Friday, wrote in a letter to the Union of Architects in Bulgaria.

"Every architect wants to see his project implemented, the money he pockets is not that important," Sofia chief architect Petar Dikov, who presided the jury, commented.

The decision to build the new cultural complex, which is located in the very heart of the capital Sofia, adjacent to the "Alexander Nevski" Cathedral, was made at the end of 2009, while in mid-April, Bulgarian state leaders broke ground of the construction site.

In December, Culture Minister, Vezhdi Rashidov, said the 24 000 square-meter museum will be designed as project of architect, Vladislav Nikolov, approved by the former socialist-led cabinet for BGN 1.8 M financing under the EU Operational Program, but later the Culture Ministry explained the Public Tender Act requires a competition and that Nikolov can participate if he wishes.