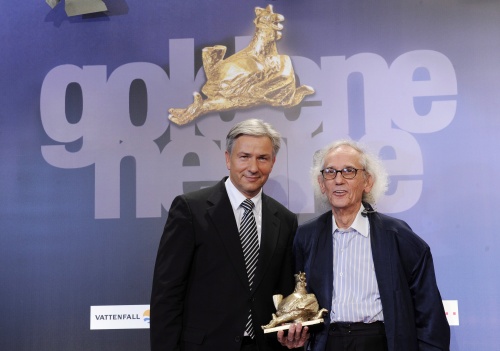 Bulgarian-born artist Christo sprang a nice surprise in Berlin when he turned up at the Goldene Henne Media Awards ceremony at the Friedrichstadt Palace.

"Thanks to Christo and Jeanne-Claude the world saw a bright and celebrating Germany," Klaus Wowereit said, referring to the famous wrapping of the German Reichstag in 1995.

Christo Yavashev was born in 1935 in Gabrovo, of a Bulgarian industrialist family. The artist was declared a honorary citizen of the town in 1997, but he failed to visit it and collect it.

Christo and his late wife Jeanne-Claude, who was French, are known for their large-scale public art pieces. They surrounded 11 islands in Miami with pink woven fabric in 1982, wrapped silver fabric around the German Reichstag in 1995 and opened 3,100 umbrellas in Japan and California in 1991.

The couple's 2005 project in New York, "The Gates," placed panels of free-flowing orange fabric suspended from gateway frames along 23 miles of the Central Park's walkways. The two-week exhibition drew 4 million visitors and generated USD 254 M from hotel stays, restaurants and other cultural attractions, according to the city.