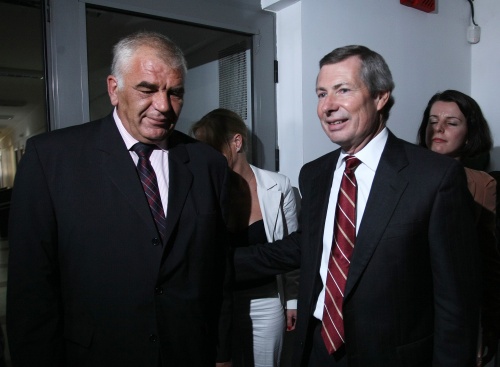 The Bulgarian Customs Agency Head, Vanyo Tanov (L) and the US Ambassador to Bulgaria, James Warlick (R), have met to negotiate US cooperation for better equipment of the Bulgarian customs. Photo by BGNES

The head of the Bulgarian Customs Agency, Vanyo Tanov, has announced that there has been no political pressure for appointments in his institution.

Tanov met Tuesday with the US Ambassador to Bulgaria, James Warlick. The two negotiated the cooperation of USA for a better equipment of the Bulgarian customs for more efficient prevention of smuggling contraband goods and substances that could be used for terrorism.

The Customs Agency head has explained that the nicknames that the customs agents have been given are unreasonable because they have all been checked by the National State Security Agency before being given access to confidential information.

His statement envisioned one of his deputies, Antoniy Strandzhev, and the former deputy head Krasimir Nikolov who was released from his position on a mutual consent and was later replaced by Borislav Borisov.

"For one year, Krasimir Nikolov was constantly attacked by the media. They constantly gave him nicknames – the Sugar, the Plywood, etc. I did not release him. He got tired that he and his family were unreasonably attacked for one year. But no one is actually accusing him directly. They only use nicknames," Tanov said.

He also pointed out that the 7-day period for submitting an appeal against the order for obligatory measurement tools in tax warehouses is currently running.

"After the order is finally in power and the 3-month gratis period is over, we will start enhanced customs checks," Tanov said.

The Customs Agency head has pointed out that after the excise goods are released from the customs warehouses, they are being controlled by the Interior Ministry.