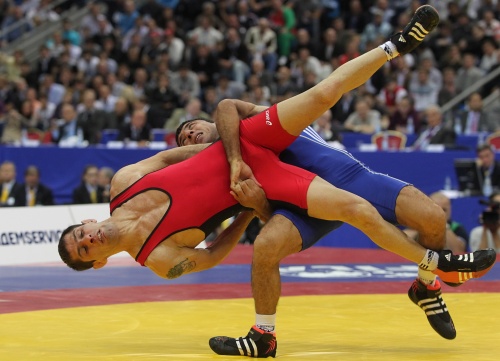 Venelin Venkov of Bulgaria (red) fights with Roman Amoyan of Armenia (blue) in the 55kg match for the second bronze medal during the World Wrestling Championships in Moscow. Venkov ended 5th. Photo by EPA/ BGNES

At the world championship 84-kg final, Marinov took the gold after overcoming Cuban, Pablo Shorey Hernandez, with 2:0 and 1:0.

The tournament is held in Moscow between September 6 and 12th,

Marinov secured the title after offering a big surprise during the semi-final match when he defeated Russian, Alexei Mishin, holder of European, World and Olympic medals.

Two other Bulgarians have ranked 5th so far – Ivo Angelov in the 60—kg category and Venelin Venkov in the 55-kg one.