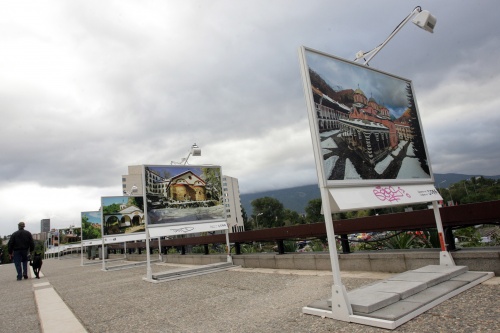 The open-air "Bulgaria in Brilliance" exhibit dedicated to Bulgarian Christianity and cultural heritage was opened in Sofia Wednesday. Photo by BGNES

The photo exhibit entitled "Bulgaria in Brilliance" is dedicated to the history of Christianity in the Bulgarian lands and the Bulgarian contribution to the world cultural heritage.

Many of the photos show the Bulgarian sites that are recognized by UNESCO as part of the world cultural heritage.

The exhibit is located on the so called "Lovers' Bridge" behind the National Palace of Culture, and is organized by the Sofia Municipality. The author of the exhibit is Tosho Peykov, a former MP.

The photo exhibit has already been shown in Brussels, Berlin, Munich, Braila, Bosilegrad, Edirne, Erevan, and in several Bulgarian cities.