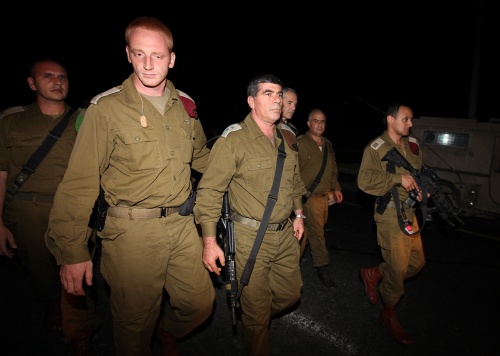 IDF chief of staff Gabi Ashkenazi (R) arrives to the scene where four Israelis were shoot dead in a car outside Jewish settlement of Kiryat Arab in the West Bank. Photo by EPA/ BGNES

The attack happened on the eve of direct negotiations between Israel and the Palestinians to be held in Washington DC. The US has appealed to both sides to not let terrorism derail the talks.

The Israelis were murdered after dark, in the West Bank, near Bani Naim, on Highway 60, a busy route used by both Palestinians and Jewish settlers. The four victims - two men and two women, one of whom was pregnant - were reportedly shot at from a passing vehicle.

The military wing of the Palestinian Islamist movement Hamas assumed responsibility for what they called a "heroic operation".

The Israeli and Palestinian leaders are to meet on Thursday for the first direct talks in two years.

The White House also condemned the killing in the "strongest possible terms," adding that all parties must "continue working to achieve a just and lasting peace in the region."

Israeli Prime Minister Benjamin Netanyahu said the attack is a prime example of the need to not compromise with Israeli demands for safety and security of the peace talks.

Netanyahu's spokesman, Nir Hefetz, said the PM had "ordered the security forces to act without diplomatic limitations in order to catch the murderers".